This year’s Teaching Excellence Award (TEA) has been awarded to an instructor in the Chinese Civilisation Centre (CCIV) who specialises in Buddhism and Chinese culture.

Mr Kwok Kam-hung, the only awardee this year, was honoured for his commitment to teaching over the years. His pedagogic practice assimilates time-honoured strategies and more recent heuristic methodologies, an approach that stimulates students’ imaginative thinking and gives him a sense of professional reward, he said.

A master’s degree graduate from the Department of Chinese, Translation and Linguistics of City University of Hong Kong in 2006, Mr Kwok said the hardest thing in life is to know oneself and that the TEA reflects how students and colleagues see him.

“My own way of teaching has won recognition, which motivates me even more,” he said, adding that he is determined to explore new possibilities in teaching and strive for perfection.

It is said that teaching is passed down, like a torch, from hand to hand. Mr Kwok recalled how a number of teachers inspired him when he was a student, impressing him with the technique of “governing the content by means of the method”.

He gradually developed his own heuristic methodology, merging the teaching content and the teaching method. He believes teaching has no fixed rules and that it is crucial to match your teaching to existing circumstances so students will readily accept your methods and be more willing to learn the materials.

Since his CCIV course is about Zen Buddhism, Mr Kwok derives his teaching approach from those of the Zen masters who made their disciples gain “sudden enlightenment” by putting them through apparently nonsensical or paradoxical questions and answers, the so-called gong’an (koan) process typical of Zen Buddhist teaching.

Based on this method, he endeavours to help young students gain answers to their questions and at the same time stimulate their critical thinking. He knows students are apt to forget part of what they hear in lectures; therefore, as a teacher, he must turn the essence of the course into something memorable, he said. 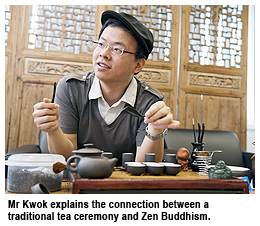 For instance, in explaining the Zen Buddhist principle of non-reliance on the written word and emphasis on sudden enlightenment through instinctive experiences, he tells students that the Zen masters believed that, once the mysteries of Buddhist teaching are expressed in words, they are simplified and lose part of their original sense. When it is then conveyed by a speaker through his or her interpretation and received by the hearer in the latter’s own understanding, still more is lost.

This is how the laconic and subtle question-and-answer Zen-style teaching method evolved, making people grasp the essence of Buddhism through direct and instant enlightenment. From here, in his own teaching practice, Mr Kwok developed a simple-to-complex way that reverses the Zen process of step-by-step simplification.

He not only teaches about Zen Buddhism, but also guides students to apply what they have learnt in the classroom to comprehend what is going on around them. This process helps foster cognitive and critical thinking by proceeding from the specific to the general, from the simplified to the rich and complex.

“So the teacher is not the main role; instead, he or she is only a facilitator,” he said.

CityU set up its TEA in 1993, the first among colleges and universities in Hong Kong to do so. The award honours outstanding teaching staff, valorises professional teaching and education, and highlights CityU’s commitment to excellence in professional education.