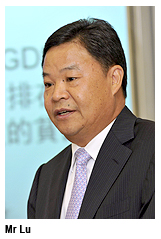 China’s foreign policy was the subject of a talk by one of the mainland’s top diplomats at City University of Hong Kong (CityU) on 27 April.

At the invitation of the Chinese Civilisation Centre, Mr Lu Xinhua, Commissioner of the Ministry of Foreign Affairs of the People’s Republic of China in the Hong Kong Special Administrative Region, gave a talk titled “Current international situation and China’s foreign policy”.

One of the foci was China achievements in economic development. Mr Lu told the 200-strong audience, comprising students, staff and external guests, that reforms initiated over the last 30 years had resulted in China’s gross national product exceeding that of Japan in 2010 to become the world’s second largest economy. 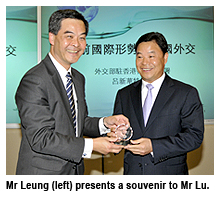 He added that China’s international standing had been boosted by the Olympic Games in Beijing and the World Expo in Shanghai.

Mr Lu pointed out that China’s foreign policy is built around peaceful development, promoting a harmonious world, pursuing a win-win opening up strategy, and adhering to a “people-oriented, diplomacy for people” policy.

To illustrate the “people-oriented, diplomacy for people” principle, Mr Lu, who was appointed in Hong Kong in March 2006, cited China’s evacuation of over 30,000 Chinese expatriates during the recent Libyan unrest. 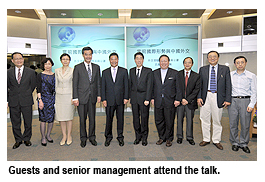 He said that one of China’s most important diplomatic responsibilities is to safeguard personal and asset security and the interests of its overseas nationals.

Sino-US relations also figured prominently in the talk. Mr Lu observed that while relations between these two nations had not always been smooth, a sense of stability is very much present. Earlier this year, President Hu Jintao discussed the future development of the two countries on a visit to the US, referring to “mutual respect, mutual benefit in order to promote the common interests of both countries” in the China-US Joint Statement, which is of much historical and practical significance. 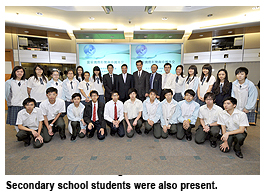