This level of growth will be fueled by overall improvements in the global economy, mainly attributable to the increase in entrepot trade and service exports benefiting from China’s robust economy, according to the CityU-UN Forecasting Model of the Hong Kong Economy (CityU-UN HK Model).

The data was submitted to the United Nations’ publication World Economic Outlook.

CityU-UN HK Model, one of 79 country models for United Nations Project LINK, is led by Professor Chou Win-lin from the Department of Economics and Finance at CityU. Currently funded by CityU’s Research Centre for International Economics, the project was formerly named Link HK Model.

In the past decade (2001-2010), forecasts for local GDP performance made either in the beginning or the middle of the year in question by Link HK Model were more accurate than the forecasts by other Hong Kong institutions (http://www.cb.cityu.edu.hk/EF/research/centers/CityU_UNLINK). 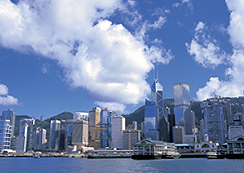 The projected rise of 5.14% this year is higher than the average rate of 4% for the past ten years and better than the government’s forecast of 4 to 5%.

“Hong Kong’s economy this year will continue to benefit from the booming mainland economy and entrepot trade,” said Professor Chou. “As the mainland has become Hong Kong’s number one trading partner with trade amounting to as much as $3,128 billion, the economic development of the mainland plays a major role in Hong Kong’s performance. The model predicts China’s GDP will increase by 8.5 to 9% this year.”

“In the CityU-UN HK Model forecast, total exports (including goods and services) in Hong Kong will rise by 13.9% this year. The projected growth rates for other components of Hong Kong’s real GDP are imports of goods and services, 13.8%; consumer spending, 5.5%; and fixed capital investment, 5.4%,” Professor Chou said.

This year’s projected growth of local GDP doesn’t seem as good as last year’s 6.8%. However, it should be noted that the strong resilience of the economy in 2010 was somewhat distorted by negative GDP growth (-2.7%) in 2009, which was due to the global financial crisis.

Regarding the possible economic impact of Japan’s earthquake and nuclear crisis, Professor Chou said, “Although Japan is currently Hong Kong’s number three trading partner, it only contributes 6.8% of Hong Kong’s total trade amount. In addition, Japan’s imports to Hong Kong make up a major portion (as high as 70%) of trade between the two places. Therefore, Japan’s economic development is not expected to have a significant impact on Hong Kong’s GDP growth.”

However, she added, “Japan’s relief work and the policy changes in nuclear energy may lead to a negative impact on import of energy. As the local commodity prices are highly susceptible to imports of goods and exports of services, the model estimates that the overall price level will go up by 4.4%.”