Law students from City University of Hong Kong (CityU) made history when they became the first team from Hong Kong to compete in the final of the Willem C. Vis (East) International Commercial Arbitration Moot. 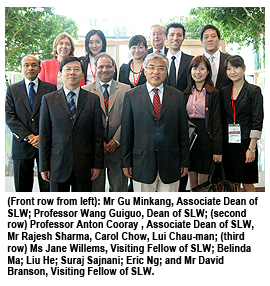 The CityU team lost to Bond University from Australia on 10 April after beating teams from Munich University, Georgetown University and the University of Hong Kong in the heats. Coming second in the moot shows that mooters from School of Law (SLW) can shine on the international stage. This fantastic achievement clearly illustrates that globalised education in the SLW is beginning to reap dividends.

Both the CityU and Bond University teams argued forcibly on jurisdictional, confidentiality issues and the merits of the case for applicants and respondents in the problem set for the moot court by the organisers.

The problem involved a controversy arising out of the international sale of goods subject to the United Nations Convention on Contracts for the International Sale of Goods (CISG). The hypothetical disagreement relating to squid as bait in long-line fishing went before an arbitral tribunal according to the arbitration rules of the Chamber of National and International Arbitration of Milan.

The Convention on the Recognition and Enforcement of Foreign Arbitral Awards (New York Convention) was considered in the imaginary states of Danubia, Equatoriana, Mediterraneo and Oceania.

This year’s moot attracted a record high 86 teams comprising 900 students, coaches and arbitrators from 19 jurisdictions. The week-long advocacy competition was held at CityU. The moot is considered not only as an educational exercise, but also a unique opportunity for international arbitration professionals to get acquainted.