Students from the School of Law at City University of Hong Kong (CityU) won the Susan J. Ferrell Intercultural Human Rights Moot Court Competition 2010/11 in the US, the first law school from mainland China and Hong Kong to win this highly competitive event. 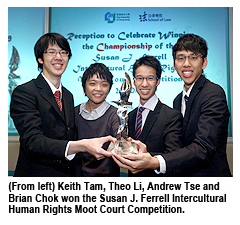 Organised by the St. Thomas University School of Law in Florida and now in its 6th year, the Susan J. Ferrell Intercultural Human Rights Moot Court Competition is the foremost moot court competition of its kind. Participating for the first time, CityU’s School of Law beat off competition from several renowned mooting teams.

The CityU team comprised Andrew Tse Cheuk-yin, Brian Chok Man-ho and Keith Tam from the Bachelor of Laws with Honours (LLB) programme, and Theo Li Jiani from the Juris Doctor (JD) programme. The School of Law’s Dr Mark Kielsgard coached the team and Mr Rajesh Sharma, the School’s Director of Mooting, supported the team throughout.

The winning team showed impressive knowledge of the law and outstanding mooting skills in the competition. The judges praised the team for its thorough training and preparation. In the final, CityU’s team defeated the University of Virginia’s School of Law, one of the top 10 law schools in the US.

To celebrate the win, a reception was held on 17 February which was attended by representatives of the Liaison Office of the Central People’s Government in the Hong Kong Special Administrative Region, guests from the legal field, and parents of the four award-winning students and their secondary school principals. 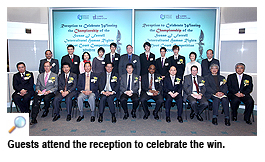 The Hon Leung Chun-ying, Council Chairman of CityU, sent a congratulatory message. “I am very proud of our students from the School of Law for winning the Susan J. Ferrell Intercultural Human Rights Moot Competition. They had to beat an Ivy League School to win the competition, which they did following a unanimous decision by the panel of international judges. This achievement epitomes our students’ hard work, talent, and competitiveness and exemplifies the quality of legal education and training provided by CityU. Therefore, this achievement brings glory not only to CityU but also the whole of Hong Kong, proving one simple point: Hong Kong provides education of the highest global standards. I, personally and on behalf of the Council, congratulate the team members, staff members and the School of Law for this historic achievement. I wish the School of Law and the University continued success.” 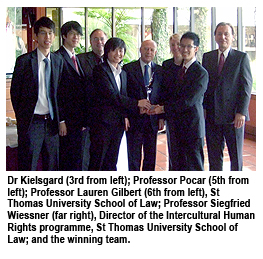 Professor Kuo said, “The tremendous performance of these four law students and the excellent support given by the School of Law are shining examples of what we can achieve at CityU. The Susan J. Ferrell Intercultural Human Rights Moot Court Competition is a highly challenging, internationally renowned event that brings together some of the best law students in the world to engage in spirited legal debate about human rights. To win the Best Team award against such stiff competition from all corners of the globe is a wonderful achievement, but to be the first team from either Hong Kong or mainland China to win this championship is even more satisfying. We see here very clear evidence that our students are more than capable of excelling in one of the most demanding of intellectual arenas—a simulated court case—using superior analytical and problem-solving skills. In addition, our scholars from the School of Law have demonstrated excellent coaching skills in the run-up to the final of the competition, providing top-notch guidance and advice. CityU aspires to be a globally renowned higher education institution and with world-class students and faculty leading the way by winning international competitions such as this one, our aspirations are fast becoming a reality.”

Professor Wang said, “What is remarkable is that our students had an opportunity to be judged by, together with other renowned jurists, His Excellency Professor Fausto Pocar, former President of the UN Human Rights Committee and the International Criminal Tribunal for the former Yugoslavia (ICTY) as well as a present member of the Appeals Chamber of both the ICTY and the International Criminal Tribunal for Rwanda. We are very proud of the CityU team, which was well trained by Dr Mark Kielsgard. All those involved made history not only for our School and the University but also for the community of Hong Kong at large. Winning a championship requires a lot of hard work and effort. The support and collaboration of all colleagues from the School of Law and others involved were indispensable. I am confident that this is only the beginning. Like other colleagues from our School, I look forward to more celebrations of this kind in the near future.”

The mooting topic concerned a dispute between a religious group and two countries involved with an application of International Covenant on Civil and Political Rights (ICCPR) and United Nations Convention against Torture. The CityU team started its preparations in October 2010, submitted memorials for Applicant and Respondent to the panel of judges in January, and competed in the US from 28 to 30 January. A mooting team is required to demonstrate its understanding of a fictional problem on international human rights, law and policy, excellent English presentation skills and analytic, advocacy and critical thinking skills.