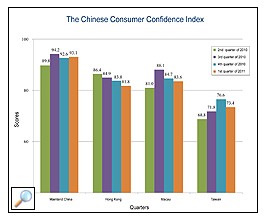 The first quarter results of the Chinese Consumer Confidence Index for 2011 released by CityU on 12 April reveal that overall consumer confidence in Hong Kong declined by 2.4% on the previous quarter, with Taiwan and Macau down by 4.2% and 1.3%, respectively, while mainland China saw confidence increase by 0.5%.

The index uses a scale of 0 (representing no confidence) to 200 (complete confidence). Scores below 100 suggest people lack confidence, while scores above 100 reflect relative confidence.

Dr Geoffrey Tso Kwok-fai, Associate Head and Associate Professor in the Department of Management Sciences, is responsible for compiling the Hong Kong index. He said the falling trend in Hong Kong started in the third quarter of 2009.

“People in Hong Kong worry that high property prices and inflation will affect living standards. In this quarter, there is no factor stimulating consumer confidence, except for the government’s announcement that it will give $6,000 to residents.” However, he added, local young people were more optimistic about spending, as the younger the respondents were, the higher the overall index score.

Dr Tso said deflation is leading to price rises, leaving Hong Kong people pessimistic about consumer prices, especially as most food is imported from the mainland.

The Chinese Consumer Confidence Index was launched in the first quarter of 2009. It is compiled by six universities in four places in the Greater China region. CityU is responsible for the research in Hong Kong based on quarterly interviews with about 1,000 residents aged 18 or above who live in the territory most of the time. The 2011 first quarter survey was conducted from 15 to 24 March.