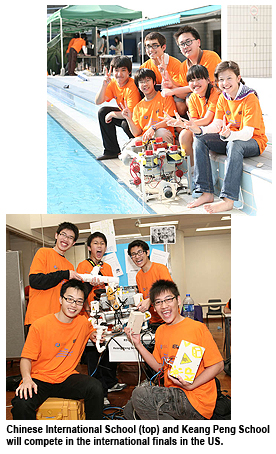 At the 6th Hong Kong Underwater Robot Challenge at City University of Hong Kong (CityU) on 10 April, secondary school teams deployed robot submarines they had made themselves to contain an “oil spill” in a simulation of the BP accident in the Gulf of Mexico last year.

Amid intense competition, Chinese International School, the champion of last year, won the championship again and Keang Peng School was the 1st runner-up. Both teams now have the opportunity to compete in the international finals in the US in the summer together with the CityU team.

This year around 100 senior secondary students from 15 schools had to manoeuvre their robots to remove a damaged riser pipe, cap a wellhead, collect a water sample and test organisms. One of the main challenges was staunching the leaking oil by turning a controlling wheel at the source of the “spill”.

“Designing and building robots is a lot of fun for students of all ages,” said Professor Paul Lam Kwan-sing, Vice President (Student Affairs). “The inter-disciplinary activities mix science, engineering and mathematics with creativity and innovation. It is a valuable learning experience." Building robots at a young age also helps to inspire an interest in science, he added. 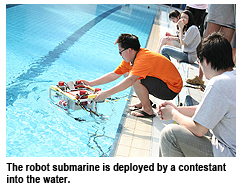 Months before the competition, jointly organised by CityU and the Institution of Engineering and Technology at the CityU swimming pool, each secondary school team was provided with robot kits and invited to attend subsequent workshops organised by CityU to learn more about practical robot know-how, such as building more advanced underwater devices and manoeuvring them to accomplish discrete tasks. New attractions this year included an underwater treasure hunt for junior secondary school students and related games for primary school students.

The rules and guidelines for the competition are based on those set by the International Underwater Robot Challenge. Teams from 19 regions and countries, including those from Hong Kong, will participate in the finals at the Neutral Buoyancy Laboratory, NASA Johnson Space Center 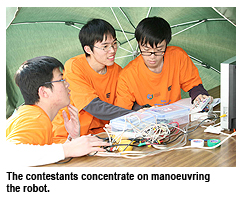 The Hong Kong regional competition, which began in 2006, has proved very popular with local secondary school teachers, students and their parents. The sponsoring bodies this year included the Community College of CityU and the Hong Kong Environment Robotics Education Association.