The final round of Hong Kong Underwater Robot Challenge 2010 competition, organised by City University of Hong Kong (CityU), took place on 11 April at the swimming pool of CityU. Two winning teams will represent Hong Kong at the international contest to be held in University of Hawaii at Hilo in June.

The rules and guidelines of the contest were based on those of an international competition scheduled to be held in Hawaii later this year. The theme of the 2010 international competition focuses on the Loihi seamount (Hawaii), an active undersea volcano that rises more than 3,000 meters above the seafloor, simulating the challenge of working in this very treacherous terrain. 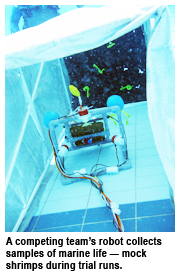 Dr Robin Sarah Bradbeer, Associate Professor in the Department of Electronic Engineering at CityU, thought the underwater missions this year were more difficult than previous ones and made the teams think harder about how they could solve the challenges in the contest. The robots had to descend to an underwater volcano, repair some scientific equipment, measure the temperature of the water venting from the volcano, and then collect samples of marine life – bacteria and shrimp. For this, they had to design and build robots that are quick, easily maneuverable, and have arms to collect the samples and to hold sensors to measure the temperature.

"This is a simulation of a real-life expedition, similar in many ways to what we have been doing for some years in the waters around Hong Kong, working with marine biologists and underwater survey teams. It’s great to see school students getting involved with experiments simulating real situations, and building real robots. These are not toys," said Dr Bradbeer. 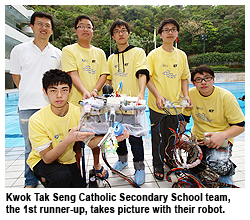 The Institute of Engineering and Technology, Hong Kong Innovative Technology and Education Association, Parents Association for the Exceptionally Gifted and Oceanway Corporation, will be sponsoring two of the three top teams to travel to Hawaii in June 2010, along with a CityU team representing the tertiary sector, to take part in the international contest, where they will be competing against teams from all over the world.

"It's a great educational experience for all concerned, one that cannot be learned any other way. It will get the students interested in the environment and the underwater world, and make them more aware of what’s going on under our oceans," said Dr Bradbeer, who has nurtured the competition over the last five years.

Aimed at enhancing the younger generation's interest in robotic technology and marine conservation, the Hong Kong Underwater Robot Challenge was started in 2006 by CityU and has since then become very popular among secondary school teachers, students and their parents. The competition this year has attracted participation from schools in Macau and international schools in Hong Kong.