Every undergraduate will have the opportunity to make an original discovery while a student at City University of Hong Kong (CityU) beginning in the 2012–13 academic year, according to the CityU Academic Development Proposal (ADP) 2012–15. 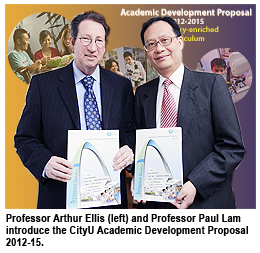 The ADP describes how the campus will use this ground-breaking approach to spearhead a new era in professional education in support of the development of higher education in Hong Kong.

The ADP uses the transition to a 4-year degree structure to introduce a unique Discovery-enriched Curriculum (DEC) that will prepare CityU students for a highly globalised, hi-tech world. By enabling all its undergraduates to have the opportunity to make an original discovery while at CityU, the campus is recognising the need for its graduates to be flexible and adaptable. Having explored the unknown as an integral part of their training, CityU graduates will be better prepared to seize new opportunities during the course of their working careers.

“Students will learn what it means to create new knowledge, communicate it, curate it, and cultivate it to benefit society,” said Professor Arthur Ellis, CityU’s Provost.

The DEC is designed to ignite a passion for knowledge and discovery in CityU students; prepare them to practice professionally to international standards; and promote a culture of knowledge and innovation that spurs local and global advancements in professional practice, Professor Ellis added.

The University is currently scheduling workshops and establishing teams in both traditional disciplines and in interdisciplinary areas to engage the entire academic and teaching staff and, ultimately, every future student in the “discover and innovate” culture.

This new culture will be advanced by an increasing emphasis on interdisciplinary teaching and research. Three such areas—new majors in energy science and engineering, bioengineering and global studies—are identified in the ADP as natural fits for CityU and top priorities for growth.

A new admissions model will admit students into colleges and schools, rather than directly into majors. Students will have at least the entire first year to select their majors, another feature described in the ADP. “During their first year students will be exposed to interdisciplinary Gateway Education courses designed to broaden their horizons and lay the foundation for selecting their major,” said Professor Ellis.

New Gateway Education courses will also help students develop English language competence in the context of the field they wish to pursue. In addition, the University is currently recruiting a CityU International Transition Team to enhance English fluency among students in a variety of subject areas.