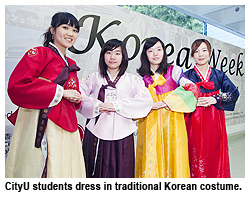 Campus let out a loud “Annyeong-haseyo!” this week at the start of a week-long festival of events celebrating the vibrant culture of Korea.

Speaking at the opening ceremony on 22 March, Deputy Consul General of the Republic of Korea in Hong Kong, Mr Min Kyong-ho, said the timing for the CityU Korea Week was perfect because Korea and Hong Kong are currently preparing to celebrate the 62nd anniversary of consular relations. 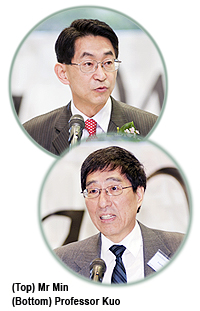 “I would like to pay tribute to CityU for playing a valuable part in encouraging the impressive and widespread growth of Korean studies throughout Hong Kong,” Mr Min said. In 2007, CityU launched Hong Kong’s first bachelor’s degree programme in Korean studies, providing a solid grounding in Korean culture, history and language.

Professor Way Kuo, University President, expressed his heartfelt gratitude for the support that the Consulate General of the Republic of Korea in Hong Kong and the local Korean business sector have extended to CityU. “This event helps us foster a multi-cultural enrichment experience for CityU students and colleagues,” he said.

Professor Gregory Lee, Dean of the College of Liberal Arts and Social Sciences and Director of the Hong Kong Advanced Institute for Cross-Disciplinary Studies, and Professor Jonathan Webster, Head of the Department of Chinese, Translation and Linguistics, also attended the opening ceremony. 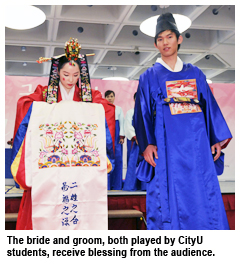 The most popular programme among the many festivities is perhaps the re-enactment of the traditional Korean wedding ceremony, which was held on 23 March.

The biennial cultural event, organised by the College of Liberal Arts and Social Sciences and the Department of Chinese, Translation and Linguistics, lasts from 22 to 26 March.