An expert in structural dynamics and wind engineering based at City University of Hong Kong (CityU) has received the 2010 First Class Award at the Higher Education Outstanding Scientific Research Output Awards (Science and Technology) from the Ministry of Education. 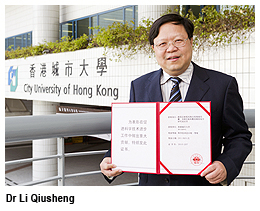 Dr Li Qiusheng, Associate Professor in the Department of Building and Construction, won the Technological Innovation Award with a project titled “Wind Effects on Super Tall Buildings: Field Monitoring, Wind Tunnel Testing and Numerical Simulation”. The measurements and models contributed by Dr Li’s research team have provided scientific data for the design and construction of taller buildings that can endure stronger typhoons.

“The Award exemplifies CityU’s commitment to creating practical knowledge and promoting social and economic advancement,” Dr Li said. “It also shows the University’s achievement in nurturing competent researchers for the mainland, as the project is a collaboration with Hunan University with many of the team members having studied or served as researchers at CityU.”

The research team led by Dr Li has been able to deduce new scientific data from field measurements, wind tunnel testings and numerical simulations. In addition to enhancing the safety of buildings, the research results have helped reduce costs in the industry. 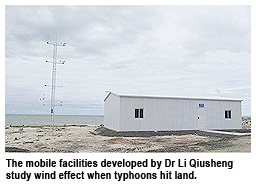 In terms of field measurement, the team is working on supertall buildings in the Greater China region, such as the Citic Plaza in Guangzhou (390 metres), International Finance Centre Two in Hong Kong (415 metres), and Taipei 101 (508 metres). It has collected extensive data on wind action and structural response, particularly on the pressures from typhoons on curtain walls and building structures.

Two highly mobile facilities have also been developed. They are deployed to target areas during the landfall of a typhoon in order to investigate pressure on the surface of the walls of the facilities, providing valuable information for the design of wind-resistant buildings.

The wind tunnel tests use large-scale models and strong turbulence to investigate wind load and wind-induced vibrations of high-rise structures when facing different forms of wind from different directions. A feasibility study on the installation of wind turbines in tall buildings for the generation of electricity power was carried out, too, through wind tunnel experiments and computational fluid dynamic analysis. The research outputs have been applied in engineering practices. 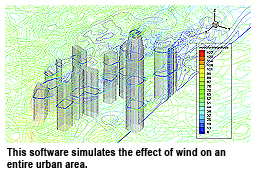 Dr Li has also developed software that simulates the effect of wind on supertall buildings or even on an entire urban area. Using this software, Dr Li has completed the wind-resistant design and wind environmental assessment of the main stadium at the World University Games, which will be held in Shenzhen this year. The stadium has been highly commended by Shenzhen government officials and experts.

“Following rapid social and economic development, a large number of supertall buildings have been built on the southeast coast of China. Because this is a typhoon-prone region, one of the major challenges is the accurate determination of the design wind loads. However, the existing wind load guidelines used in different countries cannot fully cover the wind-resistant design of supertall buildings, making it difficult for structural engineers to evaluate the wind-resistant design on these buildings,” he said.

“Our research results have reached international standards and are widely applied to construction work, providing a scientific basis for the wind-resistant design of high-rise structures” he said. Dr Li’s research interests are wind engineering, structural dynamics, earthquake engineering, reliability and risk assessment. He received China’s Outstanding Overseas Scientist Award in 2004 and was elected Cheung Kong Chair Professor by the Ministry of Education in 2007. He currently serves as the associate editor of the Journal of Structural Engineering of the American Society of Civil Engineers and an editorial board member for 10 international scientific journals.

In addition, Dr Li Youfu, Associate Professor in the Department of Manufacturing Engineering and Engineering Management received a Second Class Award in the category of Natural Science Award together with researchers in Zhejiang University of Technology and the Institute of Automation in the Chinese Academy of Sciences with the project “Three-dimensional computer modeling of active vision theory”.