Students representing just about every corner of the globe added a splash of colour to campus for CityU International Day this week. 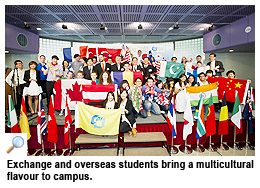 More than 40 students from 20 nations and regions paraded through the University bearing their national flags before celebrating the event with a national costume competition, a cultural showcase and a stunning dance and drum performance. Prizes were also handed out for the international basketball competition held earlier in the month.

Aileen Zhao Kejun, 20, a member of the ethnic minority Yi people in Yunnan Province and a student at Renmin University of China in Beijing, won the costume competition wearing traditional dress. “My mum made my costume especially for this event,” she said. Dressed as Uncle Sam, Arik May, 22, from the US, was the co-winner. 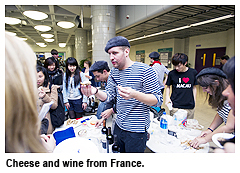 They had stiff competition from the likes of Hwang Su-yeon, 22, from Kyung Hee University in Korea, and Yasir Yahya, 21, from Quetta, Pakistan, who both wore their own colourful national dress.

At the cultural bazaar visitors could sample red wine and cheese from France, spicy India and Pakistan cuisine, cookies and beer from Finland and get an insight into the tourism scene in Turkey.

One of the highlights was a battle between two breakers introduced, and “fought”, by Vietnamese American, Peter Mai, from San Francisco. 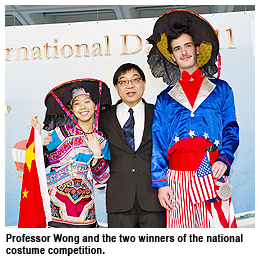 Professor Roderick Wong Sue-cheun, Vice President (Development and External Relations), praised the students for putting on such a spectacular show. He was joined at the event by several members of the senior management at CityU plus two distinguished guests: Mr Gerhard Maynhardt, Consul General of Austria, and Mr Sorin Vasile, Consul General of Romania.The event, which was put on by the Mainland and External Affairs Office on March 17, was aimed at promoting internationalisation on campus and multicultural awareness in keeping with CityU’s 5-year strategic plan.