The Creative Media Centre at City University of Hong Kong (CityU) was officially named after Sir Run Run Shaw at a ceremony on 17 March to thank the internationally renowned movie and television magnate for his staunch support to the University over the years. 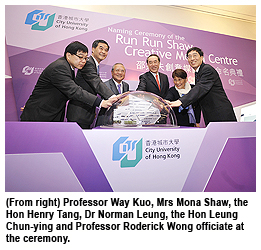 More than 100 community leaders, CityU faculty and staff, students, alumni and supporters attended the ceremony to thank Sir Run Run for supporting CityU’s pursuit of excellence and for his significant contributions to the development of the creative media industry. The Shaw Foundation Hong Kong Limited previously donated HK$100 million to support the advancement of the University.

On behalf of CityU, Dr Leung expressed his gratitude to Sir Run Run for his generous endowment and significant contributions to the education sector, noting that The Shaw Foundation’s gift provided a huge incentive to all the staff and students to work even harder to accomplish CityU’s mission.

Mr Tang, who was the Deputy Council Chairman of CityU from 2001 to 2002, congratulated CityU on the naming of the centre, pointing out the strong connection with the government’s decision to prioritise the creative industries. 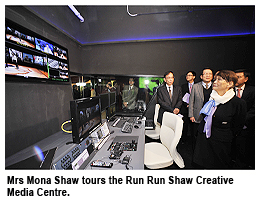 “We have devised strategies to promote Hong Kong as Asia’s creative capital and facilitate the development of our creative industries. The opening of the new Creative Media Centre complements our efforts in nurturing a deep and broad pool of creative talents. These talents will form the backbone of our creative economy for many years to come,” Mr Tang said.

Mr Leung said that CityU’s 5-year strategic plan will help transform the University into a world-class institution, one that emphasises both professional education and problem-driven research.

“Sir Run Run’s donation is a great encouragement. By naming the Creative Media Centre after Sir Run Run, we are showing our commitment to fulfilling his expectations,” he said.

Professor Kuo pointed out that Sir Run Run’s substantial input to the creative media industry will push the University to make more strenuous efforts to pursue innovative applications and studies of new media.

Sir Run Run is well known for his entrepreneurship and philanthropy. He is a strong supporter of local and mainland education and arts development, establishing the Shaw Prize in recent years to promote scientific research. 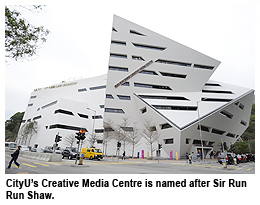 Located on Cornwall Street at the northern boundary of the CityU campus, the nine-storey centre was designed by the internationally acclaimed architect Mr Daniel Libeskind and is destined to become an international landmark. It will provide a stimulating environment and a meeting point for creative media professionals from around the world and for student-staff interactions, interdisciplinary collaborations and synergies with industry.