The exhibition is titled “Enchanting styles of the scholar’s script—Calligraphy works by Dr Sze Chi-ching” and will run from 23 February to 23 March. The aim of the exhibition is to enrich and broaden CityU students’ appreciation of the arts. 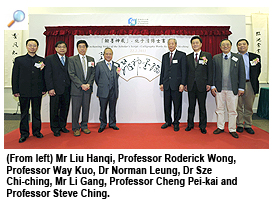 In his address, Dr Leung said Dr Sze had given enthusiastic support to the development of CityU for many years and sincerely cared about the growth of our students.

“Dr Sze is passionate about Chinese literature and calligraphy. For many years, he has been devoted to researching and practicing calligraphy. The fine works he has amassed are very precious. We thank Dr Sze for lending us some of his collection as our students now have a valuable chance to value Chinese calligraphy. This good deed once again shows Dr Sze’s care for the development of our students,” Dr Leung added.

Mr Li said he had known Mr Sze for a long time and appreciated his artwork very much. “Being selected as board director of the China Calligraphers Association implies an authoritative recognition of his standard. It also shows where he stands among professional calligraphers in Hong Kong and the Pearl River Delta region,” Mr Li said. 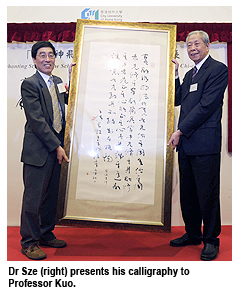 Dr Sze said he considered himself a member of the CityU community and that the exhibition was a means of reporting his accumulated learning outcomes to CityU teachers and students. “CityU is growing fast and has become a world-renowned university. I believe that in an environment that promotes professional education and research, CityU will nurture even more talent for the betterment of Hong Kong,” Dr Sze said.

In his address, Professor Kuo said Dr Sze’s calligraphy enhanced the ambience of CityU Gallery and he stressed that the event was not just an exhibition but also an activity that promoted whole-person development. In addition, Professor Wong thanked Dr Sze again for his generosity.

Dr Sze has been keenly interested in Chinese calligraphy since childhood. He has studied stone-rubbing inscriptions and calligraphy extensively, developing his own unique style. His works have been exhibited in Beijing, Fuzhou, Hangzhou, Hong Kong, Shanghai, Taiwan and Xiamen. He has also published widely in the field.

A successful entrepreneur, Dr Sze concerns himself with education and cultural development and is a well-known philanthropist in education. He is particularly supportive of CityU’s commitment to professional education.

CityU has named a lecture theatre after Dr and Mrs Sze and conferred upon Dr Sze an honorary doctoral degree in social science. 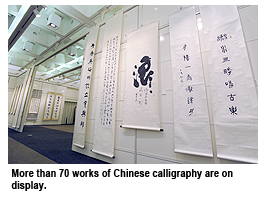 “Enchanting styles of the scholar’s script—Calligraphy works by Dr Sze Chi-ching” will be held at CityU Gallery, 6/F, Amenities Building, CityU, from 10:00 am to 7:00 pm daily. It is open to the public. For enquiries, please contact the Chinese Civilisation Centre at 3442 2477.