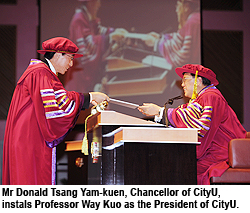 The Chancellor, The Hon Donald Tsang Yam-kuen, Chief Executive of the Hong Kong Special Administrative Region Government, presided at the ceremony to formally instal Professor Way Kuo as President of the University. He also conferred Honorary Degrees on The Hon Mr Justice Patrick Chan, Permanent Judge of the Court of Final Appeal, Dr Chow Yei-ching, GBS, Chairman and Managing Director of the Chevalier Group of Companies, and Mr Sze Chi-ching, JP, Chairman of Hang Tung Resources Holding, in recognition of their significant contributions to education and the well-being of society. (For the biographies of the honorary doctorate holders, please click here)

In his introduction of Professor Kuo, Professor Roderick Wong Sue-cheun, Vice-President (Research), said the new president is not only a renowned scholar and experienced university administrator but also a great leader who has interacted with people from all strata of the University 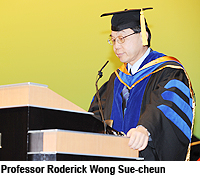 in an open and enthusiastic manner over the past six months. Professor Wong believed that Professor Kuo will lead the CityU community to devote themselves to education and research that will contribute to Hong Kong and the world as a whole.

"As CityU sets sail into waters unchartered, it is fitting it should be blessed with the leadership of a helmsman in possession of a bold and enlivening vision of the course the University should steer in coming years and decades," said Professor Wong.

In his speech, Professor Kuo expressed his gratitude towards all CityU staff who have provided him with unfailing support over the past six months. He also extended his welcome again to the new Council Chairman Mr Leung Chun-ying, and he looked forward to working with him in regards to the future development of the University. 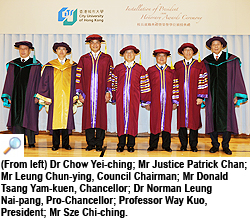 Professor Kuo said he is mapping out the new CityU strategic plan that will embrace the move from three-year to four-year undergraduate curriculum and emphasised the spirit of "problem-driven research", believing CityU is dedicated to meeting the needs of Hong Kong and the community through its emphasis on professional education and academic research to solve problems confronting society.

"CityU is now entering adulthood, matured by experience but still with the energy and enthusiasm that has always been the University's hallmark. I believe we are poised to move forward to a new stage of development that will see the University making an even greater contribution to the community," said Professor Kuo. Before closing his speech, Professor Kuo offered his warmest congratulations to all the honorary graduates and formally announced the commencement of the University's 25th Anniversary celebrations. 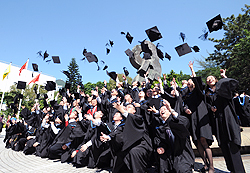 In his note of thanks, Mr Justice Patrick Chan highlighted how researchers and graduates of CityU have, in recent years, attained great success in various disciplines including law, linguistics, social work, commerce and business against stiff competition.

"In this highly competitive society, good is simply not good enough. To succeed, one needs to be better and better all the time," Mr Justice Chan said. He was confident that under the able leadership of Professor Kuo, the University would continue to flourish. 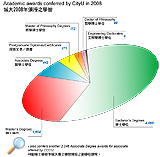