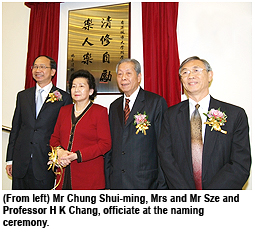 City University of Hong Kong (CityU) has dedicated Lecture Theatre 2 to Mr Sze Chi-ching, JP, Chairman of Hang Tung Resources Holding Limited, in appreciation of his contributions to Hong Kong and his generous donations to support the development of CityU.

Mr Sze, a member of the Chinese People's Political Consultative Conference, is also a prominent entrepreneur and philanthropist. His visionary business leadership has been widely recognized and he has been Visiting Professor, Advisory Professor and Council member of different well-known universities on the mainland. Mr Sze is closely involved with educational issues in China and he has set up funds to finance the development of education in both the mainland and Hong Kong.

Speaking at the Naming Ceremony, Mr Chung Shui-ming, Chairman of the University Council of CityU, encouraged students to model themselves upon Mr Sze, especially his devotion to education and philanthropy. "Mr Sze's pursuit of knowledge and his contributions to the development of the mainland and Hong Kong set a role model for students," Mr Chung said. Professor H K Chang, President of CityU, expressed his deep thanks to Mr Sze for his generous support to CityU and the education sector. "Mr Sze is devoted to education development and he believes that nurturing youngsters into outstanding leaders will benefit society. His donations to CityU will help fund University development and establish scholarships for students who have an outstanding academic record," he said.

The Mr and Mrs Sze Chi-ching Lecture Theatre, located on fourth floor of the Academic Building, is about 300 metre square and accommodates 300 people. It is fully equipped with multi-media IT and audio-visual equipment and is suitable for tutorials, lectures, seminars and conferences.