An innovative installation designed by two of the world’s most accomplished new media artists will bring the music of Bach and the mathematics of sound to the 39th Hong Kong Arts Festival this year.

“Sketches of Utopia - Experience the Architecture of Bach” designed by Professor Jeffrey Shaw, Chair Professor of Media Art and Dean of the School of Creative Media at City University of Hong Kong, and his collaborator Professor Bernd Lintermann, is a milestone in the development of creative media art in Hong Kong.

The installation is part of the “All About Bach” series of the Hong Kong Arts Festival PLUS programme, which offers a variety of activities complementing the main performing arts events.

It is also the first interactive digital media exhibition to appear as part of the Festival, according to Festival organisers. It will be housed for the duration of the six-week arts celebration in the foyer of the Hong Kong Cultural Centre. More than 70,000 visitors are expected to visit the cultural centre during the Festival.

Like an architect, Bach focused upon building blocks of music that would fit together into one harmonious whole before the final process of composition began. With a choice of five basic sets to select from at the press of a button, these metaphorically evolving architectural structures reach out, edifying and absorbing audiences as they develop and transform organically on a vast 3D screen.

Professor Shaw, who joined CityU in 2009, said interactivity is one of the primary features of today’s digital media. “This is evidenced in the ever growing popularity of video games, and it will be an essential aspect of the emerging creative industries in Hong Kong and worldwide.” The aim, he said, is to formulate a new dynamic relationship between the artwork and its viewers. 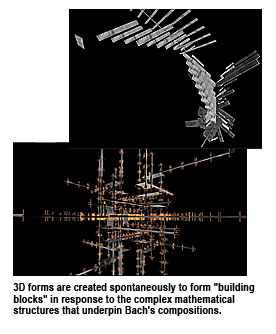 The work was commissioned originally for a performance titled “Utopia Triumphans” by a Belgian early music group in Berlin in 2002. “The performance presented the famous polyphonic vocal music of the Renaissance, whose complex evolving mathematical structures seemed to be perfectly matched to our animated algorithmically generated architectural forms,” explained Professor Shaw.

“The Hong Kong Arts Festival gave us the opportunity to adapt this work to the context of Bach’s music, and we decided to call this installation ‘Sketches of Utopia’ to indicate both the calligraphic quality of its digital imagery, as well as to give a computational interpretation to the Renaissance and Baroque utopias of a harmonious universe of mathematically ordered sounds and forms,” he added.

Professor Shaw, a pioneer in creative media art since the 1960s, was the founding director of the ZKM Institute for Visual Media Karlsruhe. In 2003 he was awarded an Australian Research Council Federation Fellowship to co-found and direct the UNSW iCinema Centre for Interactive Cinema Research. He is also the Director of the Applied Laboratory for Interactive Visualization and Embodiment at CityU.

Professor Lintermann works as an artist and a scientist in the field of real time computer graphics with a strong focus on interactive and generative systems. Since 2005 he has been Head of the Institute for Visual Media at the ZKM Center for Art and Media in Karlsruhe, Germany, and Professor at the State University of Design, Media and Arts in Karlsruhe.

The recording of Bach’s Mass in B minor was provided by Leipzig’s St Thomas Boys Choir, which will be performing an earlier version of the music at the Festival. Their performances can be seen at 8pm on 19 and 21 March at the Hong Kong Cultural Centre.

The installation is open daily from 9:30am to 10:30pm from 18 February to 26 March in the foyer of the Hong Kong Cultural Centre.