The Secretary for the Environment met academics and administrators from across campus at City University of Hong Kong (CityU) on 16 December to discuss the challenges the world faces in terms of climate change and energy sources. 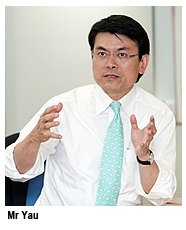 He made particular note of CityU’s decision to place energy and the environment within one school—the School of Energy and Environment—saying a cross-disciplinary approach was essential.

Mr Yau was speaking at an informal gathering of CityU academics, researchers and managers, shortly after returning from the Cancun Climate Summit in Mexico.

Professor Way Kuo, University President, Professor Arthur Ellis, Provost, and Professor Johnny Chan Chung-leung, Dean of the School of Energy and Environment (SEE), were in attendance at the meeting with Mr Yau. Professor Chan chaired the meeting and SEE was the overall organising body.

Reporting on the Cancun summit, Mr Yau spoke optimistically about progress made, saying that this year’s summit was more “business as usual” compared to last year’s meeting in Copenhagen. 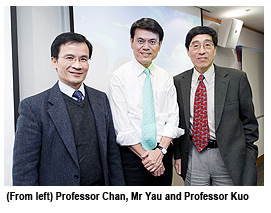 “There was less fanfare compared to last year but this year I saw more people talking, especially about issues related to the mechanism of funding ways to counter climate change,” he said.

China, Brazil and India, as emerging world economies, he added, were playing an increasingly influential role, too.

He also outlined recent government initiatives to reduce carbon intensity in Hong Kong. One major aim, he said, was to cut the per capita carbon footprint in Hong Kong from six to four tons per annum, well below the world average of seven tons.

The talks attracted personnel from a range of fields, emphasising the cross-disciplinary nature of any work involving the environment.

There were scholars from the School of Energy and Environment, Department of Asian and International Studies, Department of Public and Social Administration, Division of Building Science and Technology and senior managers from Campus Development and Facilities Office.

The subsequent roundtable discussion drew observations from a number of perspectives. These included comments on energy codes for buildings, energy efficient transport and electric vehicles, carbon tax, public perception of environmental issues and media representations of the environment, among others.

“We look to universities not just for education but also for ideas and behaviour changes,” said Mr Yau, emphasising that science and technology were at the forefront of any approach to tackling global environmental problems.

“The problems are real and now,” he said.