A prominent academician and engineer from mainland China hosted two inspiring lectures at City University of Hong Kong (CityU) on 25 November. Their topics were, respectively, “Telescope and Astronomy: A 400-year Retrospect and Future Prospects” and “Paving Roads and Building Bridges to Benefit the Society”. 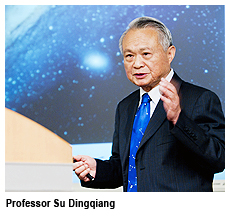 Professor Su Dingqiang of the Department of Astronomy at Nanjing University and an Academician of the Chinese Academy of Sciences, gave a presentation on the development of the telescope and related technologies over the past 400 years, from Galileo’s refracting telescope with a diameter of 3.8 centimeters in 1609 to the birth of radio astronomy and radio telescopes and LAMOST (Large Sky Area Multi-Object Fiber Spectroscopic Telescope) built in 2008.

“Astronomy as a science involves physics, philosophy, human ideology and cosmology, and it makes significant contributions to these disciplines,” he said. For example, it is closely related to the establishment of the theories on general relativity, stellar evolution, extraterrestrial exploration of planets and the theories on our galaxy, other galaxies and the evolution of the universe.

“The most important area for future research is dark matter and dark energy,” Professor Su said. Dark matter is the “invisible” matter that does not reflect or absorb light, while dark energy cannot be seen by the eye but can provide momentum for motion in the universe.

“The study of dark energy may help explain the accelerated expansion of the universe and bring forth a breakthrough in our knowledge about matter,” he added.

Following the talk on our mysterious and vast universe, the topic shifted to the achievements of road and bridge building in China over the past decades. 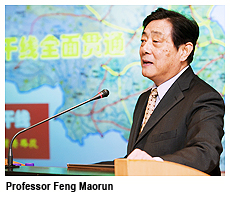 The length of completed expressways in China has now reached 65,000 kilometres and the national road network, commonly known as “the five vertical and seven horizontal” road network that connects regions in the south and north as well as in the east and west, was completed in 2007, 13 years ahead of the original schedule. The building of roads in rural areas is also in full swing.

The World Bank has commended China for its road networks development, recognising that rapid economic development closely ties in with expressway construction. In contrast, countries like Russia and India face serious limitations to their economic development because they lag behind in infrastructure projects. Currently, these countries actively study China’s successful experience in building expressways.

The construction of roads and bridges is closely related. “China’s bridge construction projects began in the Pearl River Delta Region,” Professor Feng said. Taking advantage of its status as a special economic zone, the region undertook a large number of construction projects. Over the decades since, China’s technology in building bridges has steadily improved. Different structures such as beam bridges, arch bridges and suspension bridges have been built. There are now 621,907 road bridges with a total length of 27,261 kilometres. Also, the number of bridges built across the Yangtze River has increased from three in 1979 to 129 today. There are currently 11 bridges with a span of more than 1,000 metres crossing the river.

China is now undertaking road construction in the western regions where there are particularly difficult geographic conditions such as high mountains and desert. The construction of a high-speed rail is underway in the central and eastern regions, too, and a multiple-span suspension bridge in Taizhou and a continuous steel truss arch bridge in Dasheng Pass are being built. In addition, the coastal expressway in the Pearl River Delta Region is currently under construction with a core project of a bridge connecting Hong Kong, Zhuhai and Macau. 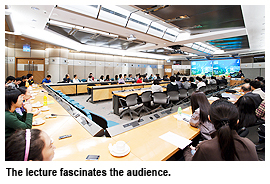 The audience was highly impressed by the rich visual presentation in the lecture and the enthusiasm and professional insights offered by the two speakers. Both of them said that China is emerging into a strong nation in the areas of astronomy and infrastructure construction. They both said they hope that the coming generations will continue the innovation and development of China’s scientific technologies.

Professor Su has presented various new propositions and optical systems in the study of telescope optics. He received the first class National Prize for Progress in Science and Technology of China, the second class State Natural Science Award of China and the Science and Technology Progress Award of Ho Leung Ho Lee Foundation. He is a four-time Chinese Academy of Sciences Award and Asteroid 19366 is named after him.

Professor Feng is a Member of the 7th National Committee of China Association for Science and Technology and he is a visiting professor at Tongji University and Southwest Jiaotong University. He has worked in the field of road and bridge construction for more than 40 years. He received the Gold Award of Outstanding National Engineering Design for his design of Jiangyin Yangtze River Bridge, the first bridge with a span of over 1,000 metres in China.

The lecture was hosted by Professor Gary Feng Gang, Associate Provost. Guests attending the lecture included Professor Lu Jian, Dean of the College of Science and Engineering, and Mr Colin Hong Tsangyi, Head of the Division of Science and Technology of Beijing-Hong Kong Academic Exchange Centre.