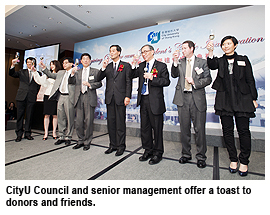 During the dinner Mr Joseph Lee Chung-tak, Chairman of the Community Relations Committee, presented the results of CityU’s fund-raising activities and the latest progress on the Fifth Matching Grant Scheme. 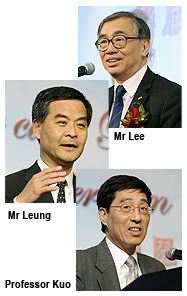 “The University has achieved an outstanding result for this year, raising more than $150 million to support the development of teaching and research,” he said.

Mr Lee also reported on the Committee’s work over last year, including visits with corporations and meetings with Legislative Councillors, secondary school principals and many media organisations. He revealed that CityU has recently established a Fundraising Taskforce and Public Relations Taskforce to enhance connection and communication within the community.

The Hon Leung Chun-ying, Council Chairman, thanked all the University’s supporters on behalf of the University community. “CityU is only a young university, but its achievements in teaching and research have been recognised worldwide. For example, CityU is ranked 15th in Asia and 129th in the world according to the 2010 University Rankings published by Quacquarelli Symonds. Your support and motivation have helped CityU attain such outstanding achievements.”

“I wish to express my sincere thanks to all the members of the President’s Circle, all of whom are close partners of the University, for offering their insights on the University’s development. Also, I wish to extend my thanks to all the individuals who have donated and supported CityU. I sincerely hope you can continue to support us in the future and help equip CityU as a world-class provider of education to students from all over the world.”

Founding members of the President’s Circle:

Alumni and staff members who received awards and souvenirs for their generous donations: