Battle of the (virtual) tanks sparks interest in programming

The Department of Computer Science was turned into a virtual battlefield when robot tanks programmed by secondary school students opened fire. 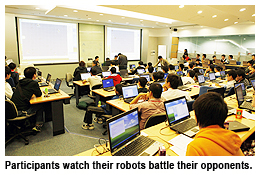 The students were taking part in the final of the CityU-CS Robocode Contest 2010 at CityU on 20 November, which attracted around 500 participants from 65 local schools. The final was screened in a laboratory in the department.

The Robocode contest, the first of its kind to be held at CityU, let participants develop virtual robots using programming software.

The aim of the competition, organised by the Department of Computer Science, was to help students learn how to compile computer codes and boost their interest in computer science through games.

The participating students said the contest allowed them to learn more about programming and motivated them to search for more information on the internet about military strategy since the contest demanded continual modification to tactics. 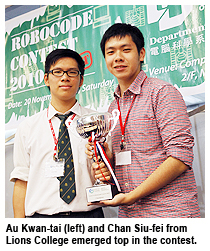 “I had a lot of time to focus on new programming skills, and we all had fun discussing and refining battlefield tactics,” said Au Kwan-tai, a member of the Lions College winning team.

Dr Duncan Wong Shek, Associate Professor of the Department of Computer Science, said that about half the participants had never studied computer programming before joining the contest.

“The competition provided a valuable opportunity for them to experience the fun of programming and to challenge their creativity by developing battlefield tactics,” he said.

The department organised seven workshops before the contest to help participants acquire essential programming knowledge and competition strategies. Students from the department acted as workshop tutors.

Dr Wong said it was particularly rewarding to see the progress of the students as the competition developed. “When it came to the final, they had already learned how to develop complicated movements and offensive and defensive tactics. They had even come up with their own creative strategies that had not been taught in the workshop,” he said.

One of the workshop tutors, Mr Kengood Lo, who graduated from the Department of Computer Science this year, said he was very happy that the contest had aroused the participants’ interest in computer programming, adding that he had encouraged them to overcome the challenges presented by the game.