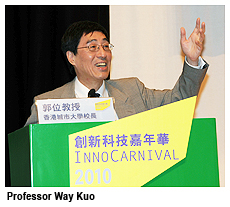 Strategies for nurturing multi-talented experts were the subject of a talk by Professor Way Kuo, President of City University of Hong Kong (CityU), at InnoCarnival 2010 on 8 November.

He told the more than 100 secondary school students in the audience that contemporary educators had to balance “special” with “general” knowledge and “specialised” with “erudite” talent in order to nurture multi-talented experts for the new knowledge-based society.

Students in Hong Kong and mainland China are usually streamed into the liberal arts, science or business in Form 4. Consequently, a student with a PhD in science and technology might not know the identity of Zhu Xi (one of the greatest scholars and philosophers of the Song Dynasty). He might even think Neo-Confucianism is a branch of physics.

However, Professor Kuo said people now need broader rather than overly specialised knowledge. Changes in the nature of work mean that young people are likely to change jobs, or even careers, during their professional life more often than in previous generations, making the need for multiple talents and skill pools even more essential. 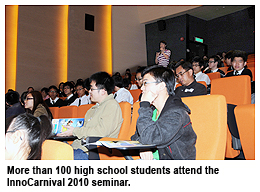 Professor Kuo drew a comparison with cooking. “Good chefs may specialise in particular cuisines but they need to know the general principles of culinary art to create their own style.”

Senior scholars should offer lectures to freshmen and sophomores in disciplines other than their own, too, Professor Kuo said. “Take the seminars sponsored by InnoCarvinal 2010. The invited speakers are presidents or well-known scholars from local universities in Hong Kong. Their lectures cover a range of subjects, such as the potential functions of the brain, the study of genes, life science and milestones in space research, all of which is excellent content for general knowledge education,” he said. 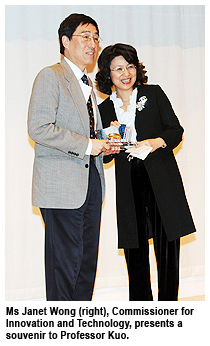 Professor Kuo pointed out that young people should be curious, not hesitant in asking questions and not afraid to challenge authority. “Innovation is essential for discovery,” he said.

A Knowledge Transfer Forum, part of the activities of the InnoTech Month 2010, was jointly hosted by CityU and seven other universities in Hong Kong from 8 to 9 November.