The State Key Laboratory of Millimeter Waves at City University of Hong Kong (CityU) has received a grant worth RMB5 million from the National Astronomical Observatory (NAO) to develop an advanced navigation and communication antenna unit and microwave integrated circuits for China’s new satellite positioning system. 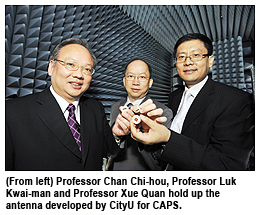 CityU is the first local tertiary institution to be invited by, and receive funding from, NAO to participate in the research and development of CAPS technology. The invitation reflects high-level recognition of CityU’s research and technological strengths.

CAPS is a national commitment and is more advanced than current satellite positioning systems. It offers both cost-effective regional navigation and voice communication services.

Chair Professor Luk Kwai-man, Director of the Laboratory, said an antenna is an essential component of a satellite positioning system. He added that CityU won the confidence of NAO because of its achievements in the development of advanced antennas as well as related devices over the past 20 years.

“We are very honoured to be invited to participate in this national-level project and contribute to the development of China’s communication systems,” Professor Luk said. 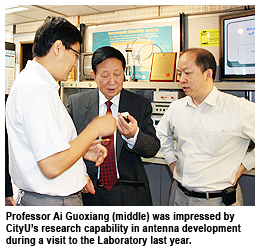 The collaboration between CityU and NAO followed a visit by Professor Ai Guoxiang, founding Director of NAO and Member of the Chinese Academy of Sciences, to CityU last November. After visiting the Laboratory, Professor Ai was impressed by CityU’s strong research capability and technological advances in frequency microwave circuit design and antenna development.

Professor Luk pointed out that the antenna design for CAPS is very complicated. It has to be small but capable of receiving signals transmitted at various angles from satellites moving in different orbits in order to ascertain a position, as well as to receive and transmit voice signals. It is particularly difficult to receive signals transmitted at low angles of elevation.

“CityU has a long history of research into antenna and microwave equipment. We have acquired extensive experience in this area, having taken part in the development of a ground receiver in the Beidou Satellite project in 2002,” Professor Luk said.

Professor Xue said the antenna under development has passed various tests designed to ensure that it receive and transmit signals from satellites, adding that research on the microwave integrated circuit has already started. The whole project is expected to finish within one year.

CAPS will be cheaper than other services currently provided by satellites because researchers will be using retiring satellites to provide voice communication services. With the service fee comparable to that of mobile phones, CAPS has huge market potential.