City University of Hong Kong (CityU) has obtained approval from the Ministry of Science and Technology to set up the State Key Laboratory of Millimeter Waves.

It will be the first such laboratory in the engineering discipline in Hong Kong. The laboratory will focus on researching the principal theories and applications of millimeter waves, including the improvement of its penetration to make the 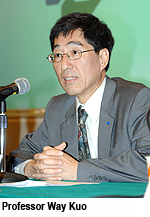 technology more accessible. It also has implications for the development of communication technologies in China. In addition, research staff at CityU will become part of the national research team that will further promote collaboration on technology development between Hong Kong and the mainland.

CityU has won international acclaim in many areas of communication technology, including millimeter wave circuit design, antenna technology and computational electromagnetics. Approval of the establishment of a state key laboratory is further proof of the technological strength of the University. The laboratory will be spearheaded by Professor (Chair) Luk Kwai-man, Head of the Department of Electronic Engineering, together with Professor (Chair) Chan Chi-hou, Dean of the Faculty of Science and Engineering, and Dr Xue Quan, Associate Professor from the Department of Electronic Engineering.

Professor Way Kuo, President of CityU, said it represents a significant honour for the University. "We will work in line with communication technology development on the mainland and promote government and commercial use of millimeter wave technologies to make further contributions to the economic development of China." 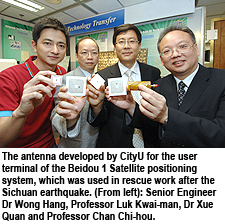 Professor Luk said the laboratory could utilise the potential of CityU's research teams to develop communication technologies for China and to enhance research quality.

Millimeter wave is an electromagnetic wave which has a very short wavelength but a high frequency (30GHz). It can be applied in many areas, including wireless communication, radar, navigation and remote control. Due to its unique characteristics, it can be used in the design of antenna for spacecrafts and crash-detection radar for helicopters and automobiles. Also, it is suitable for detecting the speed of cars and detecting hidden weapons or drugs. 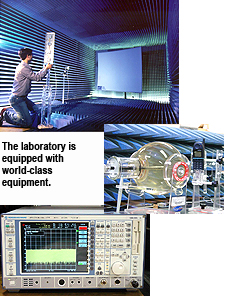 and various millimeter wave systems. In the past five years, CityU researchers have completed many projects funded by the Hong Kong government and conducted more than 100 applied research projects for corporations in the territory, the Pearl River Delta Region and other mainland cities.

Many of the communication technologies developed by the University have been put into practical use. For example, the antenna and amplifier for the user terminal of the Beidou 1 Satellite positioning system proved useful in rescue work after the Sichuan earthquake. Victims in areas where ground communication systems had broken down completely were saved after information was sent via the satellite to the rescue centre.

In addition, the laboratory has in the past nurtured many outstanding students and researchers who have received various awards in national and international competitions. Many CityU PhD graduates also received teaching appointments upon their graduation and are now teaching at leading universities in the United Kingdom, United States and Australia.

Professor Luk said the laboratory will collaborate with the State Key Laboratory of Millimeter Waves at Southeast University, Nanjing, to enhance academic research and foster exchange and cooperation in pursuit of research breakthroughs in communication technology.