Offers of scholarships to study abroad and invitations to participate in open art competitions exemplify the academic and artistic excellence of City University of Hong Kong (CityU) graduate students.

Song Yunya and Hu Tao, doctoral students at CityU, have been awarded Fellowships under the RGC-Fulbright Hong Kong Dissertation Research Programme for 2010-11. 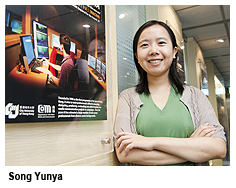 Song Yunya, a PhD student in the Department of Media and Communication, was awarded nearly HK$100,000. She will go to the University of California, Berkeley, for eight months to continue her research on the perspectives and shifting practices of American correspondents who worked in China from 1979 to 2000. She plans to conduct in-depth interviews with senior correspondents and analyse relevant literature in the US.

She said she was grateful to Chair Professor Lee Chin-chuan, Head of the Department of Media and Communication, for supervising her research at CityU. “I wish to thank CityU for providing me this precious opportunity to conduct my research in the US,” she said. 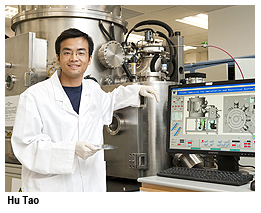 Hu Tao, a PhD student in the Department of Physics and Materials Science, has received nearly HK$75,000 to pursue his studies for six months at the University of Michigan. His work on the characterisation and properties of surface nanocrystallisation of nickel-titanium shape memory alloy as a biomaterial will have extensive applications in medical science, for example for serious spine problems.

Chair Professor Paul Chu Kim-ho was his supervisor. “CityU’s education has laid a solid foundation for my research. I hope to make use of this opportunity to further develop the technology and apply it to humans in the future,” Hu Tao said.

The short film 2012 produced by Choi Sai-ho, a 2008 SCM postgraduate, was one of the artworks selected. The film uses advanced editing techniques and sound effects to create vibrant snapshots of urban life. Choi Sai-ho said the film, one of his graduation projects, was inspired by his teachers who familiarised students about the latest developments in the creative media industry.

“Studying creative media courses at the University made me realise that artists in other countries express their concerns about phenomena in society through their work. My teachers also encouraged me to express my ideas through different art forms. Hence the film,” Choi Sai-ho said.