Two graduates and a student from City University of Hong Kong (CityU) have become the first Hong Kong team to win the Best of the Best Award at the HSBC Young Entrepreneur Awards regional competition with a business plan using transgenic fish technology that was pioneered at CityU.

“We would like to deeply thank all our professors and mentors who have guided us through the process in the past 10 months. The hours they spent helping us have been rewarded with the highest accolade,” Kunal said.

The students said they felt more confident about forging ahead with the business plan because there had already been a great deal of interest from an array of investors and potential customers.

The business plan is based on innovative transgenic fish technology developed by Dr Cheng Shuk Han of the Department of Biology and Chemistry. The technology tests food, pharmaceuticals, cosmetics and plastics for toxic substances in an economical and efficient way. 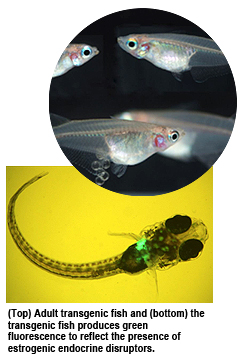 The team’s talent was first discovered when it won the CityU Outstanding Innovation Award 2009-10, an annual competition that looks for bright minds that can combine innovation with effective business planning. Seeing the potential for establishing a real business, the University introduced the students to potential investors, granting them exclusive rights to use the technology.

The team has met several potential investors and customers since winning the HSBC Hong Kong final in April, adjusting the business proposal according to comments received. The team members have also applied for funding from Hong Kong Science and Technology Parks to set up an office there.

These accomplishments, together with hard work and the mindset of winning a business deal rather than presenting an idea, helped the team win the HSBC regional competition and the Lee Kuan Yew Global Business Plan Competition. “Even the judges said no team has presented such a mature project in the last 10 years [since the competition started],” Eric said.

The next step for Eric and Kunal is to initiate the next stage of their careers. “I have had a number of job offers from major corporations and multinationals, but I have declined them all as I am determined to start this business,” Eric said.

Kunal said some of Asia’s most senior executives had been very encouraging, saying that “this fish will fly.” He added that he and Eric intend to start their business in Hong Kong and the mainland, initially providing testing services on estrogen disrupters and later expanding the scope to include other toxic materials.

Eric shared their success story and the plan to start their business in an interview with Commercial Radio. Please click here to listen to the interview.