A business plan for an innovative testing service has won not only a young entrepreneur award for three City University of Hong Kong (CityU) students, but also keen investment interest that could pave the way for them to become young entrepreneurs. 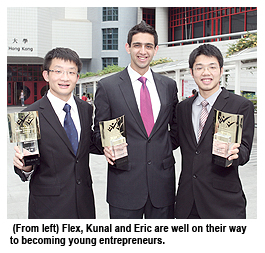 The market potential identified by the students and their solid research and analysis have attracted the attention of venture capitalists, who discover real business opportunities in their plan, which could capture a niche in the market. The venture capitalists have been in discussions with the students about investing in the business and are now conducting market analysis to ascertain the demand.

Winning the award has been a great encouragement to the team, and the venture capitalists’ interest has brought further excitement. Kunal and Eric, who will graduate this year, said they are seriously considering turning the proposal into action and have already registered a company under the name InnoTest Limited.

“The venture capitalists see the proposal as very practical and they are keen to start the business,” said Kunal. “We have worked very hard on it and are pleased with the results.” 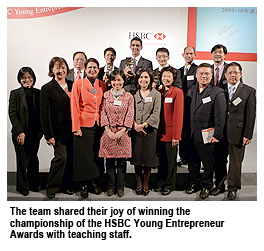 The business plan was based on an innovative transgenic fish technology developed by Dr Cheng Shuk Han of the Department of Biology and Chemistry. The technology can efficiently detect estrogen disrupters in food, pharmaceuticals, cosmetics and plastics in an economical way. Estrogen disrupters are harmful substances that threaten the lives of wildlife and humans.

Following detailed data analysis and comparison of different markets, they proposed to enter the Guangdong Province first as it exports more than 11% of the country’s manufactured food products and they are more familiar with the market. They have also devised different revenue models and calculated a payback period of two years.

Thanks to its composition, the team had the complementary skills needed to produce a tightly knit proposal. Working for hundreds of hours, they kept improving the proposal through frequent debates and rehearsals as well as advice and feedback from more than a dozen teaching staff, not to mention fellow students and friends.

“We believe the way to win is to conquer ourselves, so we focused on pushing the proposal to a very high standard,” said Eric. By including risk management in the proposal, they distinguished themselves from other contestants, and showed that they were more mature and holistic.

They said the teachers and teaching at CityU helped them win the competition and prepared them for future challenges. “We appreciate the caring culture on campus, and are thankful to the teaching staff who took extra time to help us,” Eric said.

“I was able to conduct effective research for our proposal as there is very good training on that in our studies,” said Flex. Kunal added that CityU provides abundant opportunities for students to learn and excel. “I was given the opportunity to organise global conferences like the Student Leadership Conference, which is very good training not offered by many,” he said.