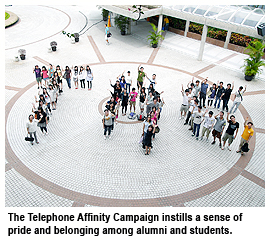 A large section of the alumni community at City University of Hong Kong (CityU) is now more aware of developments at their alma mater thanks to a coordinated telephone campaign initiated by the Development Office to promote a more caring culture among CityU students and alumni, and maintain the spirit of supporting the alma mater through donations.

The Telephone Affinity Campaign, which was first launched in 2008, has been in action since late June with around 50 students from different CityU departments making the calls.

Ms Ada Leung Wing-yee, Associate Vice-President (Development), said having students who are currently studying at CityU call up alumni can generate a closer relationship between the University and its former students.

“The callers usually phone the alumni after office hours to update them about current developments and invite them to make donations. As the campaign is not just targeted at raising funds, and since any amount of donation is welcome, alumni are willing to show their support. Donations, ranging from $100 to more than $10,000, have accumulated to a sizeable total in the past two years,” Ms Leung said.

The campaign has raised $3 million (including the Matching Grant) for the University’s development since 2008. 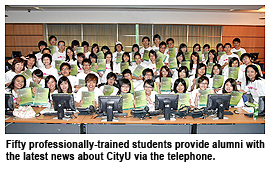 The campaign also instills a sense of pride and belonging among students, and helps them expand their social network, creating an all-win situation for the University, alumni and students. Winnie Tang Kam-yu, a Year 3 Business student, took part in the campaign last year and received the best performance award for her outstanding contributions. She said the activity provided her with the opportunity to meet alumni working in different industries. In one phone call last year, Winnie spoke to an alumnus, a solicitor by profession, who expressed keen interest in CityU’s development. He encouraged her to make the best of her university life and boost her language skills by reading more.

Although she needs to do a summer job this year, Winnie still makes time to return to campus to give her support to fellow students joining this year’s Telephone Affinity Campaign.

Since its inception in 1984, CityU has created a database of more than 130,000 alumni who can be contacted for this kind of fund-raising campaign. This year’s targets are graduates from the College of Business and the College of Humanities and Social Sciences, and many former students will be receiving their first phone call from their alma mater since they graduated.

Ms Leung added that the University provides the participating students with professional training, including basic telephone skills, talks on teamwork as well as information on the University’s latest developments.