At the invitation of City University of Hong Kong (CityU), renowned essayist and literary critic Professor Liu Zaifu gave a Distinguished Scholar Lecture on 22 April. With Professor Cheng Pei-kai, Director of CityU’s Chinese Civilisation Centre, as his interlocutor, he shared some insights about how universal values are represented in Chinese literature. 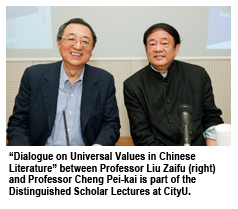 In his introduction of the speaker, Professor Cheng highlighted Professor Liu’s rare status as former Director of the Institute of Chinese Literature under the Chinese Academy of Social Sciences, heading mainland China’s top academic body of research in literature, who then spent 20 years living abroad devoting himself to research and writing, which has resulted in a great number of publications. So he would be the best person to discuss “universal values in Chinese literature”, said Professor Cheng in emphasis.

In his arresting talk on the topic, Professor Liu not only highlighted the artistic features of Chinese literature, but also stressed its socio-political relevance as well.

He began by confirming that “universal values” do exist, and went on to point out that the best Chinese literature has well represent such values. One good instance is the classic A Dream of Red Mansions by Tsao Hsueh-Chin, he said, which well transcends both temporal and geographical barriers and has touched countless hearts. The Nobel Prize in Literature for 2000 was likewise awarded to the Chinese writer Gao Xingjian “for an œuvre of universal validity, bitter insights and linguistic ingenuity”, he emphasised. 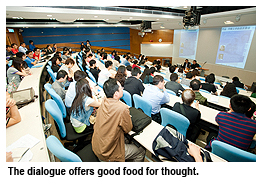 Yet, Professor Liu warned of the falsehood of some so-called “universally true” values, such as those about supremacy of Deutsch racial culture touted by Hitler in Nazi Germany or those about classes and class struggle once so dominant in mainland China. They represented only limited truths, far away from the “Great Harmony” as upheld in Confucianism.

Genuine good literature, he stressed, must go beyond worldly concerns to appeal to the heart and soul, imagination, and aesthetic experience. In this connection, Professor Liu maintains that the great Chinese classics of the pre-Qin period (770 - 221 BC) well stand on par with such world-class cultural treasures as philosophy of the West and Great Vehicle (Mahayana) Buddhism of India, as they all represent universal values.

The Chinese sage Laozi, for example, displayed a grasp of universal values when he said “There is no glory in victory” in his classic Tao Te Ching. This conveys a much nobler idea than that expressed by the Arc de Triomphe in the West, said Professor Liu.

Professor Cheng supplied some very enlightening points in his part of the dialogue. He pointed out that “universal values” would allow various interpretations, just as “a gentleman gets along with others, but not necessarily agrees 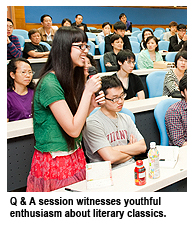 with them”, as appreciated by Confucius. And this got a quick response from Professor Liu, who pointed out that the ultimate “interpretation” would come from man’s heart and soul, which is common to all mankind.

The lecture was warmly received, with the audience posing quite a number of questions in the Q & A session. Both Professor Liu and Professor Cheng gave answers and explanations, which lasted well after the allocated time for the lecture.