A recent graduate from the Department of Applied Social Studies at City University of Hong Kong (CityU), Melody Wong Kai-yan, has been awarded the Certificate of Merit in the 2009 International Student Research Award organised by the Division of International Psychology (Division 52) of the American Psychological Association. 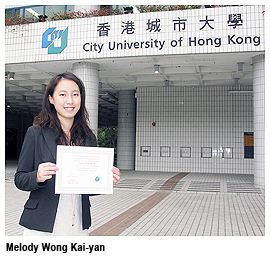 Melody’s research paper was titled A Cultural Comparison of Cognitive Emotion Regulation Strategies among Hong Kong Chinese and North Americans. Emotion regulation strategies have positive and negative sides and include acceptance, positive reappraisal, rumination, catastrophising, self-blame and blaming others. Her study investigated how the differences in cultural values moderate the impacts of emotion regulation strategies on psychological distress and interpersonal functioning.

Grown up in Canada, Melody came back to Hong Kong for secondary schooling. The experience of having lived in Western as well as Eastern societies encouraged her to dwell deeper into the differences in attitudes of the people in Eastern and Western societies and she chose this topic for her final year project. “It seems Western people are positive and optimistic; while the Eastern people are pessimistic and easily influenced by emotion. But the findings are not like that,” Melody said.

Melody administered structured questionnaires comprising over 200 questions on 66 Hong Kong university students and 43 university students from North America. She analysed and studied the psychological well-being of students with different cultural values in the context of emotion regulation. “Personal emotion is controlled by emotion regulation strategies, and emotion will influence personal well-being and psychological health,” Melody said.

Her study found that the effect of positive reappraisal strategy on Hong Kong students was stronger than North American students. For example, when facing negative emotion, positive reappraisal could have better effect in mitigating psychological distress for local students than for North American students. The study also found that North American students were more pessimistic than local students, and were more associated with catastrophising, often believing situations to be far worse than they actually are, resulting in stronger psychological distress and weaker interpersonal relationships. Catastrophising was less associated with local students; even when they were catastrophised, they could reduce their psychological distress by the positive reappraisal strategy and establish positive interpersonal relationships.

“May be local students are influenced by traditional Chinese values, which emphasise collective thinking, and they don’t want their negative personal emotions to disturb others. When they are unhappy, they are more likely to share their emotions and establish friendship with others, than the North American students,” Melody said.

Dr Dannii Yeung Yuen-lan, Assistant Professor at the Department of Applied Social Studies, was Melody’s mentor on this project. Dr Yeung said Melody is a brilliant and motivated student. Her willingness to meet new challenges was the key to success in this international competition.

After graduation, Melody is working as a behavioural therapist for autistic children. She said the three years of professional education at CityU helped her understand psychology, and choose and develop her career. The award has encouraged her for further studies, and to become an outstanding psychologist.