To help students select suitable GE courses that fit their study and career plans, the Office of the Provost held a General Education Fair on the campus from 12 - 15 January, introducing the GE courses available in the coming semester.

GE, first developed in 2005, was benchmarked against practices adopted by top universities in the world, such as Harvard. The curriculum began with the first batch of six courses in Semester B 2007-08, and has increased fivefold up to 2009-10. 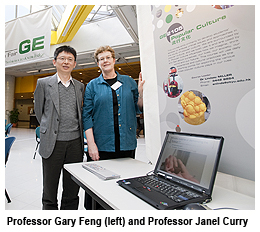 “In the new four-year curriculum, GE accounts for 30 credits among the minimum 120 credit units required for a degree,” said Professor Gary Feng Gang, Associate Provost (Academic Planning and Undergraduate Education). “Its essence is not just about adding one more year to the three-year system, it’s the cohesive integration of GE programmes within a revamped major curriculum,” he added. “Our targets are a broadened curriculum, integration of knowledge, synthesis of skills, preparation for lifelong learning, appreciation of different cultures and understanding ethics and our role in society.” GE courses will, according to Professor Feng, equip the students with the attributes required to succeed in the 21st century.

A vital part of the new four-year curriculum to be fully introduced in 2012, GE courses aim to widen students’ breadth of knowledge across disciplines, and allow them to discover interests that may open a whole new range of opportunities for further study or career choice.

A team of student ambassadors at the fair shared their experience of GE studies and Professor Janel Curry, Fulbright Scholar in GE, was also there to answer questions and provide professional advice and guidance.

“As seen from the vast amount of experience in the United States, GE changes the way students look at the world, and sometimes opens up possibilities in a field or area they never thought about before,” said Professor Curry.

Peggy Lee Pui-ki, a Year 2 student in the Department of Media and Communication, recommended the Popular Culture course she completed last semester. Although she had a background in cultural studies, she still found this course very engaging. “The course took a very interactive approach, with things such as class discussions and blog sharing, allowing us to air our thoughts and challenge each other. The topics explored were very stimulating, often resulting in heated debate. Gaining a deeper understanding of things we are so used to and often take for granted is something I had not anticipated before taking the course,” she said. 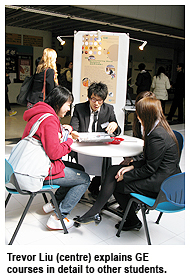 Trevor Liu Cho-hang, Year 2 student in BSc (Hon) Applied Physics, preferred diversity when choosing his GE courses. He found a social studies course on Sexuality, Culture and Diversity most interesting. “It challenged Chinese taboos and is a subject we seldom have the opportunity for in-depth discussions,” he said. The most practical course he took was in the business stream - Managing Your Personal Finances. As a science student, he found it useful to learn about the financial system and instruments relevant to daily life.

There are 28 GE courses offered in 2009-10, in three major areas of Arts and Humanities; Study of Societies, Social and Business Organisation; and Science and Technology. Under the new structure in 2012, a fully-fledged GE curriculum is anticipated to offer many more courses for students to choose from. Further information can be found at www.cityu.edu.hk/ge.