About 200 scholars and professionals from around the world gathered on 14 December to exchange ideas on a variety of contemporary, exploratory, controversial or forward-looking economic matters, global issues and topics concerning China and members of the Asia-Pacific Economic Cooperation (APEC) community.

Hosted by the APEC Study Centre of City University of Hong Kong (CityU), the three-day All China Economic (ACE) International Conference is the third annual conference held in Hong Kong. 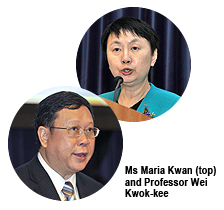 Ms Maria Kwan Sik-ning, Director-General of Trade and Industry, and Professor Wei Kwok-kee, Dean of the College of Business of CityU, officiated at the ceremony.

Maria Kwan gave an overview of the background and successes of APEC. “Hong Kong sees APEC as an important forum for us to strengthen our cooperation with other economies on a wide range of trade and economic issues,” she said.

“Looking ahead, in support of regional economic integration and to improve cooperation across borders, we will work with Singapore to champion economic reform, to devise and implement a capacity-building programme with a view to assisting other participating economies to introduce regulatory reforms that make it cheaper, faster and easier to do business within APEC economies,” Maria Kwan added.

“The College has always been committed to internationalisation. Our mission is to be a globally-oriented business school at the forefront of business ideas and knowledge,” Professor Wei said. “Our APEC Study Centre has shaped the ACE conference into an academic networking occasion for scholars to present their findings and views about Asia and the world economy.” 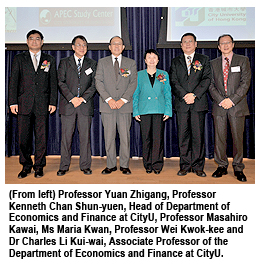 CityU invited experts from around the world to share their thoughts on a number of regional and global economic issues. During the first day of the conference, Professor Masahiro Kawai, Dean of the Asian Development Bank Institute in Japan, talked about Asia’s contribution to global economic adjustment. Dr Vivek Arora, Senior Resident Representative in China for the International Monetary Fund, discussed the global and regional economic outlook.

Over the next two days of the conference, Professor Yuan Zhigang, Dean of the School of Economics of Fudan University in Shanghai, will examine the state of China’s environment, its history, functions and prospects. Professor Wang Jiann-chyuan, Vice President of the Chung-Hua Institution for Economic Research in Taiwan, will talk about the role of Taiwan in economic integration in Asia-Pacific Region. 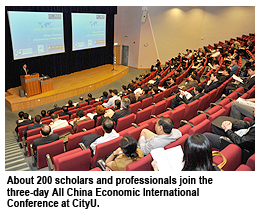 The conference was first held in Hong Kong in 2006 in response to China’s rapid integration into the global economy. Other economies around the world have at the same time experienced different degrees of structural transformation in response to globalisation. CityU saw the need for an annual international event in Hong Kong that brought together scholars and professionals from around the world to share their views on various contemporary economic issues, and to strengthen cooperation in world affairs.

The APEC Study Centre was founded in 1997 under the College of Business of CityU. Sponsored by the Department of Economics and Finance, the conference will further the core objective of advancing economic cooperation and developing a sense of community among Asia Pacific nations.

College of Business sets up International Advisory Board to boost internationalisation