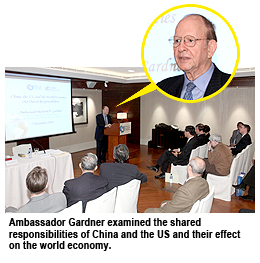 The School of Law (SLW) of City University of Hong Kong (CityU) staged a public lecture entitled “China, the US and the World Economy: Our Shared Responsibility” on 7 December. The guest speaker was Ambassador Richard N. Gardner, Professor of Law and International Organisation, at Columbia Law School.

During the lecture, Ambassador Gardner examined the significance of the General Agreement on Tariffs and Trade (GATT) and explored possible results from US President Obama’s first visit to China. Ambassador Gardner, who served as US ambassador to Italy and Spain, possesses a wealth of experience in international trade and United Nations diplomacy, in addition to his legal qualifications and teaching career.

Ambassador Gardner addressed the political achievements of GATT and examined the economic, trade and development challenges faced by the US and mainland China. Controversial topics included reform of International Monetary Fund governance and trade protectionism. Ambassador Gardner analysed these topics and shared his views with the audience. 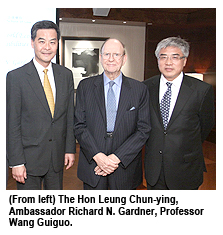 The Hon Leung Chun-ying, Council Chairman of CityU, said in his opening remarks, “US President Barack Obama’s visit to China in November was an important milestone for China-US relations and by extension the world economy. Hong Kong has a significant interest in what the two countries could do together. We are grateful for Ambassador Gardner to visit us and I thank SLW for organising this initiative.”

Professor Wang Guiguo, Dean of SLW of CityU, said, “We are very fortunate to have Ambassador Gardner, the perfect combination of foreign diplomat and academic, deliver this lecture. Over the last half century, Ambassador Gardner has been active in forging US foreign policy. His talk on China, the US and the world economy has mapped out a potential future direction for the world that would benefit not only Hong Kong, but also the world community at large.”

Ambassador Gardner is Professor of Law and International Organisation at Columbia Law School, and Senior Counsel to Morgan Lewis, a global law firm. He is also a former member of the President’s Commission on International Trade and Investment Policy and a current member of the State Department’s Advisory Committee on International Economic Policy. He holds a BA degree in Economics from Harvard, a Doctor of Jurisprudence from Yale Law School and a Doctor of Philosophy in Economics from Oxford.