Life is so busy in Hong Kong that people often rush through parks. What should be a relaxing stroll is rushed and devoid of enjoyment. To encourage the public to enjoy park visits from a different angle, more than 100 students and graduates from the School of Creative Media (SCM) at City University of Hong Kong (CityU) displayed their artworks in Hong Kong Park. By making use of different media, such as video, animation, internet, performance, installation and sound, they showcased their public art, media art and performance art to transform a familiar setting into a visual feast.

One of the public artworks on display is dubbed the “E-park”. Specially designed signage depicting pop-up windows and symbols of the internet world were erected in various locations inside the park. Created by about 120 students, the signage provided a contrast between the real and virtual worlds by combining common internet elements with creative texts that described the features of the park.

Several media artworks and performances were staged at the park conservatory, including “Take Time Rest” by Juno Chan Chun-lung, a Year 3 SCM student. He placed paper-cutouts of park buildings such as the Olympic Square and the Aviary in the park’s pool. He then created silhouettes in the pool using spotlights and recorded underwater video images. Juno’s video combined the underwater and original images to allow visitors to see the park from a new perspective. 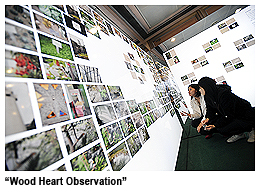 Leung Ka-yu and Hui Wai-yi, two Year 3 SCM students, designed an alternative souvenir kiosk for their performance art, “Wood Heart Observation”. The two artists took photos of the park and wrote messages behind the pictures. Park visitors could exchange their own photos taken in the park with the artists. The work attempts to link people who do not know each other through the exchange of photos and messages. Hui Wai-yi said she hoped it would promote exchanges between people of different countries. The messages were written not only in Chinese, but also in English, Japanese and Korean. 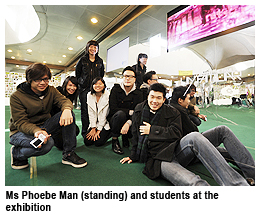 The SCM’s exhibition at Hong Kong Park is part of the “Budding Winter - Art in the Park” programme organised by the Home Affairs Bureau. Under the supervision of Ms Phoebe Man Ching-ying, Assistant Professor, more than 100 SCM students and graduates took part in the exhibition titled “Making the Familiar Unfamiliar”.

Phoebe Man pointed out that the exhibition allowed students to display their artworks, while also providing a good opportunity for them to learn how to plan and organise a public art exhibition. “Artists often need to think out of the box but they may face constraints in public venues. In this programme, students present their creative ideas in a public forum and learn about the feasibility of promoting public art in Hong Kong.”

SCM graduate Frankie Chan Wai-lun was responsible for coordinating the exhibition. He handled tasks ranging from discussions with students on the exhibit theme and format, communication between different work units, decorations and the installation of artworks to promote the exhibition. “At SCM, we are not only nurtured to become an artist. We also learn skills such as writing art critiques and organising art exhibitions, which are also important aspects of being a modern artist.”

The exhibition will be held from 24 November to 31 January next year. For details, please visit the website http://sweb.cityu.edu.hk/aip/.