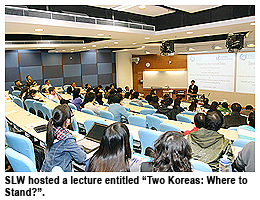 As part of the Eminent Speakers Lecture Series, Professor Park analysed the historical and social dynamic between the two Koreas. He pointed out that North Korea was one of the most difficult countries in the world to understand, due in large part to its unpredictable political machinations. He cited examples such as North Korea’s recent mix of hostile rhetoric and sometimes softer attitude towards South Korea and North Korea threatening South Korea with “merciless military measures” as it sought to protect its Yellow Sea border.

Professor Park also looked at public perceptions of the dispute and subsequent reconciliation attempts, suggesting that Koreans possibly viewed the process as relatively normal, while the outside world considered the arrangement and relationship perplexing. 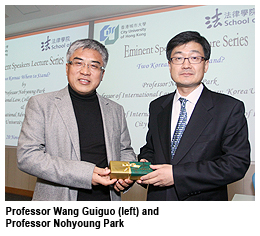 Professor Wang Guiguo, Dean of SLW of CityU, said in his opening remarks, “SLW aims to equip law students with global knowledge and a worldly perspective. By attending lectures delivered by prominent professors from different countries, law students should be able to develop stronger analytical skills. It is also important for them to keep abreast of world affairs.”