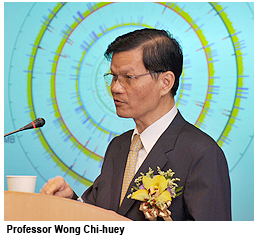 A distinguished lecture by one of the world’s most original and prolific researchers in bio-organic chemistry, Professor Wong Chi-huey, President of the Academia Sinica, Taiwan, was held at CityU on 11 November.

The day prior to the lecture, Professor Wong had been conferred an honorary doctoral degree from CityU in recognition of his significant contribution to the well-being of society.

This lecture, entitled "Post-translational Glycosylation: Challenges and Opportunities," was one in a series of distinguished lectures taking place at CityU that are given by world-renowned scientists at the cutting edge of their chosen fields as part of CityU's 25th anniversary celebrations.

Professor Wong’s lecture covered the largely unchartered research territory of protein glycosylation which, with more than 90 percent of human proteins glycosylated, is the most complex post-translational process. Its significance lies in its implications in identifying new cancer biomarkers for diagnosis and drug discovery.

"The significance of glycosylation at the molecular level is not well understood, and as such the pace for the development of carbohydrate-based drug discovery and diagnosis is relatively slow,” said Professor Wong. “It is thus important to develop new tools to study the effect of glycosylation on the structure and function of proteins and other biologically active molecules.”

The lecture focused on the development of new methods for the synthesis of homogenous glycoproteins with well defined glycan structure, 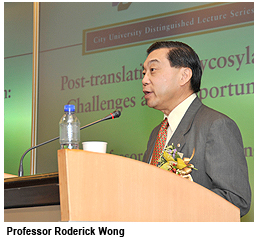 Professor Wong is a world renowned chemist, whose work has contributed significantly to the progress in medical research and to improving human health. His research interests are in the areas of bio-organic and synthetic chemistry and biocatalysis, including the development of new synthetic chemistry. He is globally recognised for his pioneering work on the development of chemical and enzymatic methods enabling elucidation of carbohydrate-mediated biological recognition processes, which has provided a powerful platform for tackling important problems in the immune system, bacterial and viral infections, and cancer metastasis.