City University of Hong Kong (CityU) conferred honorary doctoral degrees upon five outstanding persons in recognition of their significant contribution to the well-being of society at the Honorary Awards Ceremony held on 10 November. 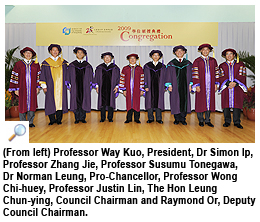 Speaking after the ceremony, Professor Lin said CityU is a young, dynamic and innovative university, and commended its achievement in becoming a leading world university within the relatively short span of 25 years. He praised CityU for its vision in nurturing professionals and creating knowledge for the well-being of society. “It is wise for CityU to position itself as a knowledge hub to help us better understand nature and society and to propel mankind towards a brighter future,” Professor Lin said.

“Being a CityU honorary doctorate holder, it will be my pleasure, as a member of the University, to work with all faculty, staff and students and contribute to the academic and economic developments of Hong Kong and mainland China, as well as the betterment of the human race,” he added. 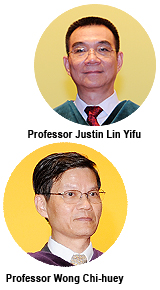 Professor Lin is one of the key “think tank” members of major decision-making departments within the Chinese government. His works have formed a distinct “Lin school of thought” on economic development, and his exceptional research has won many international awards. Professor Lin is the first Chief Economist and Senior Vice President of the World Bank from a developing country.

Professor Wong is one of the world’s most original and prolific researchers in bio-organic chemistry. His research interests are in the areas of bio-organic and synthetic chemistry and biocatalysis, including the development of new synthetic chemistry. He is globally recognised for his pioneering work on the development of chemical and enzymatic methods enabling elucidation of carbohydrate-mediated biological recognition processes, which has provided a powerful platform for tackling important problems in the immune system, bacterial and viral infections, and cancer metastasis.

Professor Tonegawa, Japan’s only winner of a Nobel Prize in Physiology or Medicine, is a visionary scientific pioneer. He has made significant contributions to immunology and cutting-edge research in neuroscience, as well as boasting outstanding achievements in promoting cooperation between interdisciplinary areas.

Professor Zhang is highly respected in the fields of x-ray lasers and high field physics. His research in high field physics has advanced our understanding of the physical process of high energy density under extreme conditions similar to those in the core of the sun or at the edge of a black hole. His research will also help pave the way in the search for alternative energy sources. Professor Zhang’s education philosophy and new practices have provided invaluable experience for achieving China’s goal of building world-class universities.

Dr Ip’s fame centres on his integrity and supreme ability to serve the public, both professionally and socially. He is a leader whose name evokes reverence in Hong Kong, especially in legal and educational circles. Dr Ip has close relationship with CityU’s School of Law. While encouraging others to contribute to the exchanges between the Chinese and Hong Kong judiciaries, he himself first sets examples and has raised funds for CityU to provide advanced legal education to serving Chinese judges.

In his note of thanks, Dr Simon Ip said CityU is the largest of our local universities in terms of student numbers, despite occupying a smaller campus, and has achieved international recognition as a quality institution over the years. “During its relatively short life, it has enjoyed extraordinary growth and remarkable success. There is no doubt in my mind that it will continue to scale new heights,” he added.

Professor Kuo reminded the graduates that their chance of becoming a successful professional depended upon how they adapted to the accelerating process of globalisation. “Change has become the only constant in today’s fast-moving world. The way in which trade and industry function will continue to evolve, as will technology and the structure of international markets,” he said. Professor Kuo also encouraged graduates not to resist change but to drive it. “Only by observing trends and anticipating change will you stay one step ahead and enjoy the benefits of continuous self-advancement and sustained success,” he added.

As an institution that always nurtures a diversity of cultures, CityU itself is undergoing a major transformation. “Our campus is set to grow by nearly 60 percent over the next few years, with new buildings and facilities that will be a source of pride to both our university community, and the city as a whole,” Professor Kuo said. 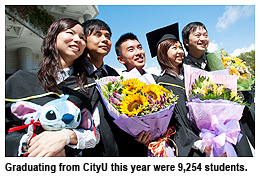 Speaking on behalf of his fellow graduates, Yan Xiao, a graduate of Bachelor of Engineering (Hons) in Mechatronic Engineering programme, said the professional education they received at CityU included the knowledge itself and the way they learnt, which has provided them with a solid foundation that will be extremely useful to their future careers.

Professor Zhang presided at an academic activity held at CityU prior to the Honorary Awards Ceremony and Professor Wong will preside at another one immediately following it. Professor Zhang hosted the “World Under Extreme Conditions” lecture to discuss the applications of ultra-intense lasers in science. Professor Wong will host a lecture on 11 November, titled “Post-translational Glycosylation: Challenges and Opportunities”, which will focus on the development of the synthesis of homogenous glycoproteins and other relevant unique researches used to identify new cancer biomarkers for diagnosis and drug discovery.

Professor Tonegawa, with six other prominent scholars from around the world, converged at the “Frontiers in Bioscience: Learning and Memory” conference in June, to shed light on neuroscience advances that could help enhance memory and brain function.