Dead Slowly, a film directed by Miss Rita Hui Nga-shu, Instructor of the School of Creative Media at City University of Hong Kong (CityU), has become the first Hong Kong film selected to compete for the New Currents Award at the 14th Pusan International Film Festival since its establishment in 1996. 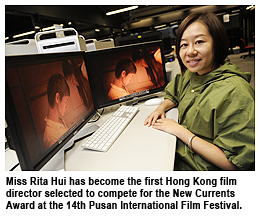 It has also been selected as the opening film of the Hong Kong Asian Independent Film Festival (HKAIFF) and will be shown on 14 November.

This year’s New Currents Award features 12 films, with Dead Slowly the only Hong Kong film competing for this award. Rita said the good reception to her first full-length film would encourage her to continue create films with different styles. “I thought the judges chose my film because they liked my style of storytelling,” Rita said. She also used editing techniques to showcase the complex relationships between different characters.

Dead Slowly revolves around glimpses of fragments of a crime to establish various characters and relationships. Rita said detective stories generally tried to reveal the truth about a particular case but she wanted to challenge this traditional approach. As the investigation continues, the truth surrounding the case becomes blurred and the complex relationships between different characters are revealed.

Rita spent nearly two years producing the film, which was sponsored by the Hong Kong Arts Development Council. She also invited CityU graduates and students to be a part of the production team. This provided a chance for them to practice and gain experience.

Man Pui-ki, a Year 3 SCM student who was responsible for set design, said it was a valuable opportunity to work with the teacher, graduates and practitioners. During the production process, he needed to understand the ideas being conveyed by the art director and then explain and arrange the tasks for other colleagues. “I have had the chance to use the professional jargon and skills acquired at SCM during this practical experience, which has motivated me to work in the film industry in the future,” Man Pui-ki said.

Rita taught creative writing and video production at CityU. She covered different shooting and production techniques with students and provided appropriate comments to inspire students to think more thoroughly. She said creating the story and shooting were the most important creative stages, while editing was the next important step. “Through editing, I can rearrange the footage I have collected to present the story in my style,” Rita said. She said she aims to share her editing experience and help inspire student creativity.