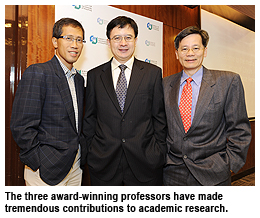 The award aims to recognise and reward research excellence, emphasise the University’s commitment to creating an environment conducive to high quality research at an internationally competitive level and enhance the University’s performance in delivering its research agenda. The Selection Panel identifies outstanding researchers who have provided evidence of their successful contribution to research that has had a significant impact on industrial, economic and social development in Hong Kong and beyond.

Professor Yang is a world leader in the research of nonlinear mathematical theories of conservation laws and kinetic equations. He has accrued many outstanding achievements and built a fine reputation in the field of applied mathematics, and was awarded the Morningside Silver Medal of Mathematics from the International Congress of Chinese Mathematicians in 1998, a Joint Research Fund for Hong Kong and Macau Young Scholars from the National Science Fund for Distinguished Young Scholars in 2004, and a Changjiang Chair Professorship from the State Council of the People's Republic of China in 2005. He has also received General Research Funding (formerly known as the Competitive Earmarked Research Grant) every year since joining CityU in 1994.

As Chair Professor of the Department of Mathematics, College of Science and Engineering, Professor Yang Tong’s research work has earned him international recognition. His body of research work is extremely substantial, involving a wide range of research topics from macroscopic Conservation Laws to the Boltzmann Equation in mesoscopic kinetic theory.

Although the Newton equation is the first principle of classical mechanics, and the model long adhered to physics since 17th century, only part of it has been verified with mathematical rigour in recent decades. Professor Tong solved a major mathematical problem with his renowned collaborator, Professor Liu Tai-ping, Academician of Academia Sinica. One of the important results was the introduction of the “Liu-Yang functional” that leads to the definitive settling of the well-posedness theory for hyperbolic conservation laws in one space dimension. It is regarded as one of the most remarkable accomplishments of Professor Yang.

Professor Leung’s research is in management, international business and psychology. His contributions can be grouped into three broad areas. Firstly, his research has elucidated the behaviour of Chinese in social and organisational settings, often through comparison with other cultural groups. His second line of research is on cross-cultural research methodology, which addresses major methodological issues in cross-cultural research. His third line of research is on cross-cultural issues, which aims to explicate and examine empirically the major constructs associated with culture around the world. His current project on social axioms is especially noteworthy. Its primary goal is to study general beliefs around the world and relate them to diverse social and organisational behaviours.

Professor Cheng’s research is focused on the needs of older persons in the context of age-related changes. He is an expert consultant to the United Nations Programme on Ageing, with a focus on international policy in the Asia-Pacific region. He is a Fellow of the American Psychological Association, from which he received the Outstanding International Psychologist Award.

Professor Cheng has been engaged in several lines of research that have attracted international attention, including the intergenerational transfer of social capital and the broader question of social support to older people; the effectiveness of different interventions (e.g. mahjong therapy) on improving the quality of life and cognitive function of nursing home residents; improving the detection and prevention of depression and suicide in older people; and formulating psychological mechanisms to protect the well-being despite age-related decline and loss. His most recent research focus is on developing innovative ways to help the surging numbers of informal caregivers of family members with dementia. His applied research benefits people in Hong Kong and beyond.