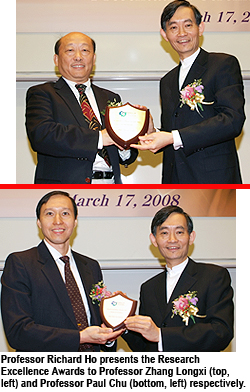 CityU introduced the new REA Scheme to recognise and reward research excellence. After thorough deliberation, the Judging Panel, comprising both internal and external assessors, unanimously decided to confer the Grand Award to Professor Zhang Longxi, Chair Professor in the Department of Chinese, Translation and Linguistics; and the Award of Excellence to Professor Paul Chu Kim-ho, Chair Professor in the Department of Physics and Materials Science.

Professor Zhang was excited about winning the award, saying REA, with its high standards, was a great way to promote high quality research and enhance the visibility of the University.

“A world-class university is one that has among its faculty famous scholars whose research and scholarship are internationally recognised and influential. CityU has many good researchers, and REA is a wonderful way to recognise their work and encourage them to aim high and make great contributions to international scholarship,” he said.

Professor Chu said he was happy to receive the honour, and hoped the University would continue to provide support for researchers. 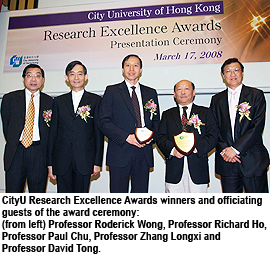 Speaking at the ceremony, Professor Ho thanked all the university researchers for their contributions that help CityU fulfil its mission.

“We are committed to creating an environment conducive to high quality research at an internationally competitive level. REA is one of the many initiatives in place to encourage and support staff to actively take part in research work,” said Professor Ho.

A total of 23 applications were received and rigorously assessed by a seven-member panel comprising academics, senior researchers and business leaders. Six candidates were shortlisted for a meeting with the judging panel who then selected the winners for the Grand Award and Award for Excellence.

Professor Roderick Wong Sue-cheun, Vice-President (Research), said many applications were of high quality and he encouraged colleagues to participate in the next round of the scheme. “This is a good experience to review and showcase your research achievements,” Professor Wong said.

Professor Zhang Longxi is a world renowned scholar in humanities and cross-cultural studies. His main research interest is in promoting cross-cultural understanding between China and the West, from the perspective of East-West comparative studies. His publications have received high acclaim in the international arena. Being widely respected for his outstanding achievements, Professor Zhang has received numerous prestigious honours and appointments worldwide.

Professor Paul Chu is a leading scientist in plasma science and materials engineering. His work has led to a much better fundamental understanding of how energetic plasma ions impact on and interact with surfaces. A myriad of innovative plasma technologies and applications having industrial impact have also been developed. Professor Chu has received many prestigious awards for his research work.