Professor Way Kuo, President of City University of Hong Kong, addressed the Second Forum on Future Development of China on 30 October, citing investment in new scientific areas, in particular energy and zoonosis, as a top priority to support sustained development in China and around the world.

Professor Kuo pointed out that many people emphasised the seriousness of last year’s financial tsunami by comparing it to the Great Depression of the 1930s. However, few people mentioned the measures adopted by the US government during the financial and industrial slump to facilitate economic recovery, such as the unemployment relief programme and the construction of public buildings. Most noticeable were the measures initiated by Tennessee Valley Authority (TVA). These measures transformed the environment in the southern states of the US, which had been overgrown with weeds and inundated by floodwaters. Simultaneously, many jobs were created to relieve the strains upon poverty-stricken families.

Not coincidentally, the present US government increased its investment in science and research instead of reducing it when the financial crisis emerged. The Oak Ridge National Laboratory under the US Department of Energy was allocated $2 billion this year, twice the amount of last year. “Though different from the relief programme adopted by the US government during the Great Depression, it will achieve equally satisfactory results,” said Professor Kuo.

Professor Kuo cited Portugal as another example, which has made outstanding achievements in the past few years by attaching importance to investment and capitalising on opportunities that arise in times of crisis. For China, increasing investment could very well be the right strategy for sustained development. “The universities in Hong Kong should explore new scientific areas while consolidating strengths in existing disciplines,” said Professor Kuo. “Of the vast areas worth investing, energy is no doubt an important area closely related to the development of China and the whole world. China will be one of the countries that will witness rapid development in nuclear industry. As a result, it will face a series of new challenges, such as the supply of uranium, the raw material for nuclear energy.” 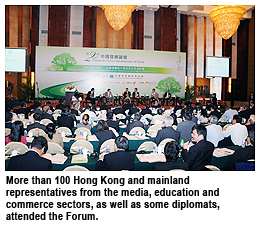 Professor Kuo said health is another important area worthy of investment, especially zoonosis research and disease prevention. “According to the World Health Organisation, 75% of existing epidemic diseases were transmitted to humans from animals. So far as China is concerned, zoonosis research, veterinary science and human health are important scientific areas worth supporting financially. Failing to give heed to these scientific areas could lead to China incurring great economic losses.”

The Second Forum of Future Development of China, entitled “Beyond the Financial Tsunami ― The Effects of the Global Financial Crisis on China’s Economy”, was held by the Hong Kong Pei Hua Education Foundation in Nansha, a rapidly developing new town near Hong Kong. More than 100 mainland and Hong Kong representatives from the media, education and commerce sectors attended the forum, together with foreign diplomats. Distinguished speakers included Professor Robert A. Mundell, Nobel Laureate in Economics and acknowledged “Father of the Euro”, and 15 presidents or their representatives from the mainland and Hong Kong universities and media leaders. Dr. Lee Shau-kee, Chairman of Pei Hua Education Foundation, also attended the forum and delivered a speech.

Reliability is part of your life