Reliability is part of your life 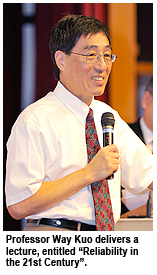 These are not sensational statements, but solid facts derived from reliability analysis made by Professor Way Kuo, President of City University of Hong Kong (CityU).

Professor Kuo is a celebrated pioneer in the reliability design for microelectronic products and systems and has made significant contributions in this field, for which he was elected a member of the US National Academy of Engineering, International Academy for Quality and Academia Sinica in Taiwan, and a Foreign Member of Chinese Academy of Engineering. He delivered a lecture on 6 October, entitled “Reliability in the 21st Century”, which attracted an audience of over 300 from within and outside the University. The lecture is one of the events of CityU’s silver jubilee celebrations. 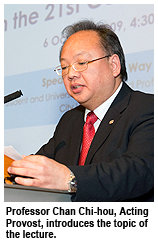 Professor Chan Chi-hou, Acting Provost and moderator of the lecture, pointed out in his introduction that Professor Kuo’s topic received enthusiastic response at the 11th Annual Meeting of the China Association of Science & Technology, held in early September in China.

Professor Kuo said: “Reliability covers a wide range of areas and is an integral part of our life.” For example, the lifespan of a person, the acceptance rate of electronic products, the warranty period of automobiles, the accident rate of aeroplanes and the safety of nuclear power plants are all part of reliability.

Professor Kuo pointed out reliability is a means of assessment and its principles should be as simple as possible, despite the fact that many systems are indeed very complicated. The space-shuttle is a typical example. That is why people are worried every time a space-shuttle is launched. He also said that people are the most unreliable element among all systems. He quoted the comments made by Confucius about his disciple Yan Yuan. According to Confucius, who had 3,000 s 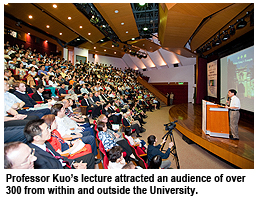 tudents and among them 72 outstanding disciples, only his brightest student Yan Yuan could manage to stay away from making a mistake for three months. “The human beings are the biggest bottleneck in enhancing our living quality,” Professor Kuo said. “If human reliability could be improved, this world will be much more safe and peaceful.”

Professor Kuo said that reliability is a time function. According to time function analysis, there is no constant phenomenon. Reliability is also the result of the contention between strength and stress. When stress exceeds strength, accidents tend to occur. When stress is inferior to strength, accidents will be less probable. This makes one think of the importance of reducing stress.

At the end of his lecture, Professor Kuo talked about the relationship between reliability and expected life. He pointed out by citing the data from B. L. Cohen’s book Before It’s Too Late: A cup of sugar-free soft drink a day will take 2 days off one’s expected life, 5 times the time taken off from one’s expected life for residing near a nuclear power plant (0.4 day). From whatever perspective it is judged, Professor Kuo concluded, nuclear energy is undoubtedly the most economical, space-saving and cost-effective energy resource in our life as long as reliability is thorougly evaluated.