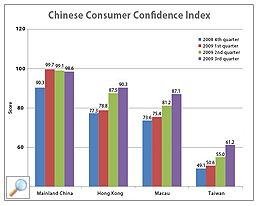 Consumer sentiment towards economic development in mainland China, Hong Kong, Macau and Taiwan has been improving since the financial tsunami swept the world markets a year ago, with Hong Kong and Macau taking the biggest leap, according to a survey conducted by City University of Hong Kong (CityU).

The overall Hong Kong Consumer Confidence Index has been rising for two quarters to 90.3, 2.8 points higher than the second quarter, and placed second after mainland China. Consumer confidence in economic development in all four places has been increasing for two consecutive quarters, with Hong Kong and Macau recording the biggest surge. The 2009 third quarter scores for Hong Kong and Macau increased 16.8% and 19.9% respectively from the second quarter, and 52.0% and 43.7% respectively compared with the first quarter. 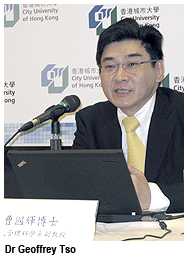 “The rising index indicates consumer confidence in mainland China, Hong Kong, Macau and Taiwan has been recovering since the financial downturn and Hong Kong people have become more confident about the economic future,” said Dr Geoffrey Tso Kwok-fai, Associate Professor of CityU’s Department of Management Sciences, who carried out the survey.

The consumer confidence index, a component of the CityIndex to be launched by CityU reflecting the overall social and economic situation in Hong Kong, details consumer sentiment towards economic development, employment, consumer prices, living standards, housing purchases and stock investment. It serves as an indicator of spending intentions over a particular period by examining consumer perceptions about current and anticipated social and economic conditions.

Confidence in economic development, employment, living standards and stock investment continued to improve, whereas confidence in consumer prices (-5.7) and housing purchases (-12.7) fell. Dr Tso believed this was probably due to rebounding consumer and property prices.

CityU has coordinated the Hong Kong Consumer Confidence Index since the third quarter of 2008. The research team collects views quarterly from more than 1,000 Hong Kong residents aged 18 or above.