Consumer confidence levels rose for two consecutive quarters in Hong Kong to 87.5, up 8.7 points on the last quarter, according to a survey conducted by City University of Hong Kong (CityU).

The consumer confidence index, a component of the CityIndex to be launched by CityU reflecting the overall social and economic situation in Hong Kong, details consumer sentiment towards economic development, employment, consumer prices, living standards, housing purchases and stock investment. It serves as an indicator of spending intentions over a particular period by examining consumer perceptions about current and anticipated social and economic conditions.

CityU also jointly conducted the Chinese Consumer Confidence Index survey together with Capital University of Economics and Business, Central University of Finance and Economics, Fu Jen Catholic University, Taiwan, and Macau University of Science and Technology to understand and compare the trends of consumer confidence in the four places.

The overall Hong Kong Consumer Confidence Index shows an upward trend, though it has been below 100 for the past three quarters, reflecting Hong Kong consumers’ general lack of confidence in all six measured areas. (The 2008 fourth quarter, 2009 first quarter and 2009 second quarter results, from a possible highest score of 200, were 77.3, 78.8 and 87.5 respectively. Refer to Table 1.) 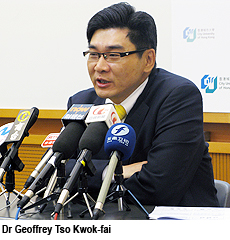 “The rising index reveals consumer sentiment in Hong Kong is still at a relatively low level but has been improving, indicating Hong Kong people are stepping out of the shadow of the financial meltdown,” said Dr Geoffrey Tso Kwok-fai, Associate Professor of CityU’s Department of Management Sciences, who carried out the survey.

Hong Kong consumers were most confident about living standards, which scored 106.4 in the 2009 second quarter. They were the least confident about employment. Despite rebounding from its lowest score (56.5) to 74.8, this category was the lowest among the six measured due, in all likelihood, to the high unemployment rate.

Confidence in the property and stock markets continued to improve. The confidence index for house purchases increased from 84.6 to 88.2 and stock investment from 78.1 to 88.3.

In a similar result to last quarter’s Chinese Consumer Confidence Index, Beijing scored the highest in the 2009 second quarter (99.1), while Hong Kong placed second (87.5). The results in Macau and Taiwan were 81.2 and 55.0 respectively. People in Beijing, Hong Kong and Macau were most confident about living standards, whereas Taiwanese had most confidence in housing purchases. (Refer to Table 2)

CityU has coordinated the Hong Kong Consumer Confidence Index since the third quarter of 2008. The research team collects views quarterly from more than 1,000 Hong Kong residents aged 18 or above using a computer-assisted telephone interview system.

Table 1: Results for the past three quarters of the Hong Kong Consumer Confidence Index