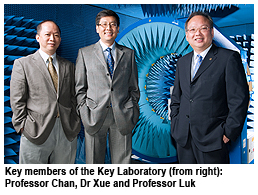 The Government of Shenzhen allocated a sum of RMB 21 million in 2009 to eight research projects. CityU and Tsinghua University are the only two education institutions outside of Shenzhen to have been granted funding. Dr Xue Quan, Associate Professor of the Department of Electronic Engineering, is in charge of the project. He said people tend to expect wireless communication to transmit as much information as possible to the farthest distance, without understanding the expense involved, such as environmental pollution caused by electromagnetic radiation, high energy-consumption and cost.

“Actually, sufficient capacity is all we need,” said Dr Xue, who is still using the traditional corded-earphone for his mobile phone. “The small-power communication apparatus is low in radiation, energy-efficient and won’t disturb others.”

In 2008, Dr Xue, together with two key members of the Shenzhen Key Laboratory: Chair Professor Chan Chi-hou, Acting Provost, and Chair Professor Luk Kwai-man, Head of the Department of Electronic Engineering, received a seed funding of HK$4.2 million from the University to establish the Information and Communication Technologies (ICT) Centre. As an extension of CityU’s State Key Laboratory of Millimeter Waves, the ICT Centre is dedicated to develop new research and cooperative projects on the mainland. 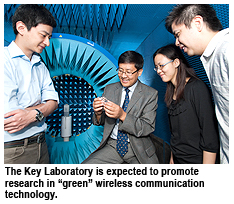 As Deputy Director of CityU’s State Key Laboratory of Millimeter Waves, Dr Xue has been engaged for years in millimeter wave and broadband wireless communication research, particularly in “green” wireless communication products such as the wireless antenna called “personal area network”. This kind of antenna will be part of the research on new wireless communication. Once developed, it will enable us to connect and coordinate in an environmentally-friendly way all the personal electronic products, e.g., mobile phones, camcorders, cameras, iPod and Netbook.

Based on our strength and achievement in “green” wireless communication technology research, CityU has recently signed a research project with Huawei Technologies Co., Ltd., the world’s largest manufacturer of communication equipment, using the technology developed by CityU from electromagnetic-bandgap (EBG) Structures to enhance radio frequency, especially the linear properties and efficiency of the radio frequency amplifier and reduce power consumption and radiation.

Dr Xue is excited about funding from the Shenzhen Government, believing it is a successful example of getting support from governments on the mainland. They will apply for funding again for enhanced projects in the future for sustaining development.

Dr Xue stated that the greater part of the funding will be used to purchase advanced equipment, recruit research personnel and build up an experimental platform for carrying out research on millimeter wave antenna and circuit. At the same time, the Key Laboratory will promote its collaboration with state research institutes on the mainland and enterprises in Shenzhen for developing crash-detection radar, applied millimeter wave systems, such as high data rate wireless transmission components, short-range multimedia wireless access systems, such as local area network and personal area network, and broadband wireless communication technology. Besides, they will apply for high-level patents. “We’ll work with Zhongsan University in training graduate students as well,” Dr Xue added.