Professor Way Kuo, President of City University of Hong Kong (CityU), visited leading universities and research institutions in France from 27 to 30 September to pave way for enhanced academic collaboration and student exchange in the future.

“Giving students and teachers the opportunities to study and work with peers from overseas institutions of international standing is high on the University’s agenda of strategic development,” said Professor Kuo. “This is not only part of the quality professional education we are committed to providing, but also critical to promoting research excellence and internationalisation of CityU.”

Upon arrival in Paris on early Sunday morning, Professor Kuo went directly to visit the Institut des Hautes Études Scientifiques (IHÉS), a top-notch research institute particularly known for its excellence in mathematics and physics, where he was hosted by its Director, Professor Jean-Pierre Bourguignon, a world-renowned mathematician. He also talked to President Xavier Michel at Ecole Polytechnique (ranked 36 in the 2009 THES World University Rankings), and held talks with Professor Jean-Francois Roch, Deputy President of Ecole Normale Supérieure de Cachan. These institutions are among the most prestigious in teaching and research in France. All of them expressed strong interest in starting academic and student exchange or expanding research collaboration with CityU, which will enhance the University’s competitiveness and far-reaching global network. 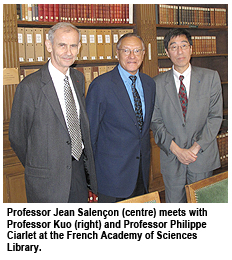 Accompanied by Chair Professor Philippe Ciarlet of CityU’s Department of Mathematics, who is a member of the French Academy of Sciences, and Dr Zhu Guobin, Associate Professor of the School of Law, Professor Kuo also visited the French Academy of Sciences, where he met with Professor Jean Salençon and Professor Jean Dercourt, President and Perpetual Secretary of the Academy. In addition, the delegation paid a visit to the Collège de France, where they met with Professor Pierre Corvol, President of the Collège de France, to strengthen existing collaborative relations and explore new areas of collaboration.

There have been quite frequent exchanges between CityU and these leading institutions. For example, a number of prominent French scholars have delivered lectures since 2005 on mathematics, chemistry, physics, and biology at CityU, in particular the seven lectures of the France-Hong Kong Distinguished Lecture Series by professors of the Collège de France and members of the French Academy of Sciences. They were launched at Professor Ciarlet’s initiative with strong support from the French Academy of Sciences, the Consulate General of France in Hong Kong and CityU. “The collaboration of this high quality shall not only continue, but also be further explored to better benefit our students and teachers”, Professor Kuo stressed.