Professor Way Kuo, President of City University of Hong Kong (CityU), led a five-member delegation between 9 and 12 September to visit Zhejiang University, Shanghai Jiaotong University and Fudan University, with a view to allocating more resources to strengthening academic collaboration and exchange with top mainland universities. According to the latest university ranking on the mainland, the universities visited are ranked third, fourth and sixth respectively in China in 2008.

Professor Kuo intended to formalise the existing collaboration on individual projects between university departments by transforming them into university-level projects. 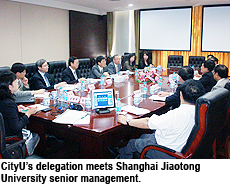 "CityU will allocate more resources to consolidating cooperation with top mainland universities by making the existing arrangement more systematic. We aim to develop the University into a strategic partner with mainland universities and serve as a transit point for them to connect with overseas universities," said Professor Kuo.

Professor Kuo stressed that mainland universities had made rapid and significant progress in recent years, as evidenced by their steady rise in international rankings. It appeared likely their ranking would surpass that of local universities within five to 10 years, he said. Therefore, CityU should focus on actual work rather than empty talk. 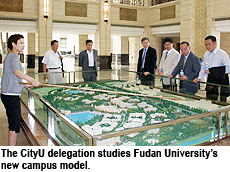 In this regard, CityU would consolidate the existing collaborative projects with mainland universities and explore further cooperation prospects under the principle of "unity through each other's strengths, complementing advantages and creating a win-win situation". Professor Kuo encouraged the University's faculties and departments to explore the possibility of collaborating with mainland universities under the policy "initiatives by faculties and departments with the guidance of the University."

CityU's delegation visited the new campus areas of the three universities and received updates on their latest developments. In meetings with university management, the delegation discussed areas such as the development of academic departments, academic strengths and collaboration. Several agreements were concluded, including those relating to joint programmes to nurture PhD students, offering joint degree programmes, student exchange programme, and expansion and provision of CityU training to mainland administrative staff. In addition, the delegation discussed the possibility of setting up a CityU Shanghai office on the Shanghai Jiaotong University campus. 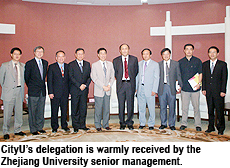 Throughout the visit, it became evident to the delegation that the rapid development of mainland universities would not be halted. Their determination to become world-class universities, and their achievements so far, were highly commendable. "Their outstanding development may put pressure on us. However, we are confident it will only add momentum to the acceleration of our internationalisation process. Under the leadership of Professor Kuo, all students and staff will be united to build a brighter future for CityU," Dr Zhu said.