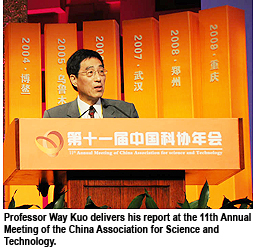 Professor Way Kuo, President of City University of Hong Kong (CityU), took part in the 11th Annual Meeting of the China Association for Science and Technology (CAST) held in Chongqing, China. He presented his paper titled “Reliability in the 21st Century” on 8 September, discussing the importance of reliability research to China’s future development.

From engineering feats to daily life experiences, Professor Kuo discussed the features of reliability from the perspective of the rise and fall of a city, durability of buildings, guarantee periods for automobiles and hedge ratios.

“Reliability is a means of assessment and its principles should be as simple as possible, despite the fact that many systems are indeed very complicated,” Professor Kuo said. “People are the most unreliable element among all systems. If the reliability of people can be raised 1%, we will have a better world.”

“The theme of this year’s CAST annual meeting is ‘Innovation and Sustained Growth’. The development of nuclear energy is part of China’s future energy plan,” Professor Kuo added. “According to reliability research, it is more likely that a car will have an accident, a disease be cured or a microelectronic system malfunction. The failure rate of nuclear plants is, comparatively, the lowest.” 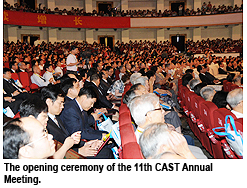 The meeting lasts for three days, from 8-10 September. The main session attracted 3,300 participants, while more than 30 academic exchange sessions, 10 thematic forums and a series of science popularisation activities have been arranged. The meeting as a whole attracted more than 6,000 participants, among which about 150 were academicians of the Chinese Academy of Sciences (CAS) and Chinese Academy of Engineering (CAE).

Deng Nan, Executive Vice President of CAST, officiated at the opening ceremony, while Han Qide, CAST President, addressed the meeting. The congratulatory message from Bo Xilai, Secretary of Chongqing Municipal Committee, was also read out. Besides Professor Way Kuo, five other distinguished scientists and leading officials were invited to give academic reports. They were Lu Yongxiang, President of CAS; Xu Kuangdi, President of CAE; Wang Hongju, Mayor of Chongqing; Wu Hequan, Vice President of CAE, and Zhang Shuguang, Deputy Chief Engineer of the Ministry of Railway.

Jointly organised by CAST and the Chongqing municipal government, the annual meeting is a major high level event in China’s science and technology sector. Since 1999, the annual event has been held in Hangzhou, Xi’an, Changchun, Chengdu, Qionghai/Bo’ao, Urumchi, Beijing, Wuhan and Zhengzhou respectively. The focus is on major technology or economic development issues that arise during the year, with the objectives of popularising science, integrating cross-disciplinary studies and enhancing social and economic developments of the host region. The annual meeting invites distinguished local and overseas scholars to take part in academic exchanges and arranges activities that promote science. Thousands of science and technology professionals took part in the annual meeting, with a record of around 170 academicians and 6,700 professionals participating in one year. The significance of the event can be seen from its direct impact on tens of thousands of people.

In addition, Professor Kuo will deliver the President’s Lecture on “Reliability in the 21st Century” on 6 October as part of the celebratory events for CityU’s 25th anniversary. Details of the lecture can be found on the lecture website .