Twenty-eight City University of Hong Kong (CityU) students benefited from the IT exchange programme managed by Cyberport Digital Media Centre. Students travelled to Australia, Canada, New Zealand, the UK and Japan during the summer to work in various companies and institutions where they undertook information technology or digital media training.

The College of Business, College of Science and Engineering and School of Creative Media students were sponsored by the Office of the Government Chief Information Officer of the HKSAR Government to go on two-week to four-month visits. The programme fulfilled CityU’s mission of providing professional education. 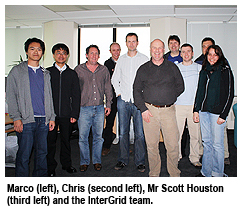 Marco Po Wing-pong, a Year 3 student of the Bachelor of Science (Hons) in Creative Media programme, and Chris Yan Chon-wan, a recent graduate of the same programme, spent a rewarding month in Wellington, New Zealand, working as interns at InterGrid, the company that provided computing solutions during the making of Oscar-winning movie trilogy Lord of the Rings.

Marco and Chris had the privilege of working under the direct supervision of InterGrid CEO Mr Scott Houston. Their main job was to develop two websites for the company. They added new features such as blogs and forums to the “Green Button” website and also created a new website for the “Raygun Rendering Competition” organised jointly by InterGrid, HP and Weta Digital. They created various website functions so that users could register accounts and vote for the works they liked most.

“The tasks have helped strengthen our web development skills because we were able to apply what we learned at school in real situations,” said Marco. “It was also an incredible experience for us to be able to work with a team at the forefront of this technology.”

Wellington, despite its small population, is home to a thriving creative media industry. “Everyone in Wellington knows someone who is working in creative media,” Chris said. “We met some key industry people when Mr Houston took us along to industry gatherings. That was a good opportunity to learn about the latest in digital media, movie production and animation.” 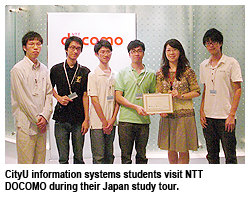 Oliver Leung Fu-shing, a Year 2 student from the Department of Information Systems and four other students from the same department were offered the valuable opportunity to visit NTT DOCOMO and KDDI, the two largest mobile phone companies in Japan, during a 10-day visit.

The CityU team also visited the Tokyo Institute of Technology and Osaka University. They learnt from Associate Professor Masanori Akiyoshi of Osaka University about how social science and information technology can join forces to provide new solutions, such as a search engine that can respond to questions.