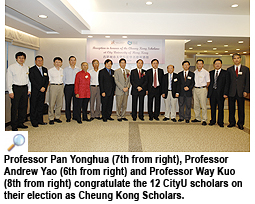 City University of Hong Kong (CityU)Distinguished guests attending the reception included Professor Pan Yonghua, Director-General of the Education, Science and Technology Department of the Liaison Office of the Central People’s Government in the HKSAR; Professor Andrew Yao Chichih, Member of the Recruitment Advisory Board for the Cheung Kong Scholars Programme and professor of Tsinghua University; heads and representatives from CityU administrative units and academic departments. Professor Pan said in his speech that the fact so many CityU scholars were elected was a reflection on the high academic standards of the University. CityU held a reception to congratulate the University’s 12 academic staff that were elected as Cheung Kong Scholars on 16 September. The scholars from business, humanities and science and engineering fields contribute tangibly to CityU’s role in developing professionals and research in mainland China. 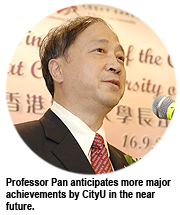 “With so many distinguished academics at CityU, I’m sure the University under the leadership of Professor Kuo will utilise its strengths to enhance collaboration between Hong Kong and the mainland,” said Professor Pan. 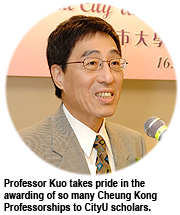 Professor Way Kuo, CityU President, pointed out in his speech that among the ten scholars from Hong Kong receiving the Cheung Kong Chair Professorship this year, four were from CityU. The University was proud of its achievement in having the largest share in the total number of local awardees. He added that the collaboration between CityU’s Cheung Kong Scholars and mainland universities and industry is integral to the existing close links between CityU and the mainland.

Professor Feng said on behalf of the elected CityU scholars that to serve as Cheung Kong Scholars was both an honour and motivation to do better. He thanked the University for providing an environment that enabled academics to make full use of their research capabilities and potential.

The Cheung Kong Scholars Programme is one of the Ministry of Education’s major talent incubation programmes. With its mission focused on the recruitment of professors, appointment of chair professors and launch of the Cheung Kong Scholars Achievement Award, the programme has earned wide public acclaim and specific praise from academics and the higher education sector.